“All mankind is of one author, and is one volume; when one man dies, one chapter is not torn out of the book, but translated into a better language; and every chapter must be so translated…As therefore the bell that rings to a sermon, calls not upon the preacher only, but upon the congregation to come: so this bell calls us all: but how much more me, who am brought so near the door by this sickness….No man is an island, entire of itself…any man’s death diminishes me, because I am involved in mankind; and therefore never send to know for whom the bell tolls; it tolls for thee.”

{Ed’s Note: My thanks to those who nudged this article in the right direction, I appreciate muchly, as one of Terry’s teachers – Mac Fingall – would say}

I do not understand, I can not understand – I am baffled and ensorrowed at the loss of a good and worthy media personality at the peak of his flow. Terry Mayers did not even live to see his 41st birthday! T.J. (Terence Jr) is little son is not even one yet, as far as I know. Barely married two years, damn. 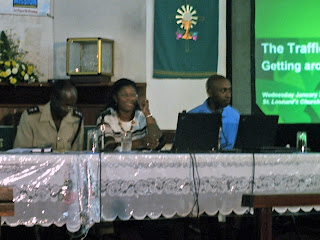 We would disagree yet remain fiercely loyal brothers-in-arms watching each other’s backs – he holding for Lodge Secondary while I always sought to brag for Kolij (Harrison College). His humour was so unique yet so easy to understand – one night during the Evening News just before the C&W Sports World began they jumped to a shot of him readying on the set during a commercial break!

When they really started that segment of the EN, he just winked and said he was peeping to make sure you were there. I also used a variation of that line when they botched the Headlines one night and the Newsroom Management got vex at me, Terry saw me about to lose my cool and he said to me that I was performing copyright infringement and that is why there’s an Inquisition. Everyone laughed and the tension broke.

He later said to chill as I have to accept that for whatever reasons were about, anything I do was a problem – even if it had a precedent like his remark! As I said, we’d look out for each other…

He spent 15 years at CBC, starting as an announcer and worked his way to Asst Director Of Sports; therefore, when he took the voluntary separation package from CBC, it was a shock to many there at the time, yet I privately cheered him on like he was Andy in Shawshank Redemption and I was one of of the lifers who wished I was heading for Zihuatanejo but wondered if I really had the balls (I did, but that’s not for here right now).

Although he freelanced at CMC, he started a video production company called Amaya, I asked him about the name and he said (back then) if he had a daughter that is what he’d call her. Amaya Productions was a ninja, it got into Grenada and Caymans after Hurricane Ivan when most were turned away, folk still dunno how he did ’em. His first full-length feature was a very well researched interview in Colorado, USA with Professor Bill Gray of the University of Colorado in 2005 about that year’s windy season for this region, I recall it as it ran the following year after Sept. ’04’s Hurricane Ivan!

Then he got a cushy post with the Barbados LOC of the Cricket World Cup as their Corporate Communications Mgr, and he was very aggressive in ensuring Barbados was ready for the game (Terry did his part, as for everyone else, that is another forum), even so far as getting in the van and doing loudspeaker PSA notices all over the island. He was a coach with the Barbados Team for the International Senior Games. The next position he recently assumed was PRO with the Barbados Olympic Association.

The man did not partake of booze, could stand in a rumshop for hours and not even smell a beer-cap; he ran like the wind – sometimes from CBC to home when he was out Graeme Hall side; played golf with Sir Garry and his cricket fascination and involvement is legendary.

I saw him Monday last week at QEH’s Intensive Care Unit, he did not see me – he was unconscious and hooked up to a massive barrage of machines. As I left, I made sure to knock my fist against his knuckles.

Rather than finish sad, let me regale you with one of his finer jokes, as best as I can recall…

A rastaman was out of work for so long he got annoyed and decided to create a job for himself. He got a wheelbarrow with a large steel dish and had these small breadcrumb-encrusted patties resting on the metal plate, people just look at them as he’d bellow;-

“FRIED PRAM-PRAM, $2 FOR 3 CAKES! EASY TO MAKE, EASY TO BAKE! CHANGES YOUR PULSE, INCREASES YOUR INTELLIGENCE AND STRAIGHTENS YOUR HAIR! TWO DOLLAR FOR THREE CAKES, TRY MY FRIED PRAM-PRAM NOW!“

Finally, one of the villagers got a dose of courage and tried out the new delicacy, but soon wrinkled his face…

The dread smiled and responded, “Increases your intelligence!“

The man looked at him and his eyes went wide as he gasped, the rasta – not missing a beat – added, “Changes you pulse, nuh?“

Sure enough, with full realisation the man’s hair stood on end, while the rasta quickly ran off bellowing –

“FRIED PRAM-PRAM, $2 FOR 3 CAKES! EASY TO MAKE, EASY TO BAKE! CHANGES YOUR PULSE, INCREASES YOUR INTELLIGENCE AND STRAIGHTENS YOUR HAIR! TWO DOLLAR FOR THREE CAKES, TRY MY FRIED PRAM-PRAM NOW!“