Here’s our roving Global Indigenous Champion, Damon Corrie, on his latest lesson from the United Nations in New York (unlike Barbados Underground, he feels they have some worth still) –

I will never forget all the new Indigenous brothers and sisters I had to honour to meet at the recently concluded United Nations Permanent Forum on Indigenous Issues at UN Headquarters in New York City; USA.

In the 15 person Tribal Link sponsored group that I was fortunate to be a part of there were 7 Indigenous people from the Americas, 1 from Europe, 3 from the Pacific, and 4 Maasai from Africa. 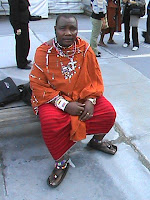 The first Maasai I had ever met was Daniel Rogei of Kenya, we were both trained on another UN sponsored course in the town of Sissimuit 200 miles into the Arctic Circle Greenland in September 2001; we watched in shock and sorrow as the twin towers collapsed live on the TV in our recreation room on the morning of 9/11.

Prior to that Daniel had explained to me how it was their rite of passage for 10 Maasai teenaged boys to hunt and kill a Lion – armed only with spears, often at least one of the 10 did not survive…and Daniel himself bore long scars. Once this had been accomplished the young men were eligible to marry, and in the Maasai culture men can have more than one wife – so I agreed that the risk was certainly worth the reward!

I was overjoyed to see Daniel again as we were together once more on a UN program – but this time at the UN headquarters in New York. 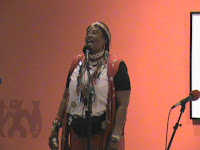 This time around I had the pleasure to also meet Ole Lengai – a very large Maasai man from Tanzania, and also the beautiful young Kenyan Maasai Rene Rimas and her mother Mary Simat – the most famous Maasai woman rights leader/activist on the earth today!

Lengai was bigger than any Massai man I had ever seen on TV and I was shocked when he told me that the 6 foot tall average of Maasai men today was nothing compared to the generations before, he said his grandfather’s generation were truly tall and big men far bigger than him – and Lengai himself shook his hotel apartment floor whenever he walked around the room…. no wonder the Maasai were so feared and respected by those who first met them many years ago.

Lengai’s roommates were Ronald Taggaoa of the Philippines and Tafue Lusama (who we called ‘Osama‘ in public – especially when near to Law enforcement officials) from Tuvalu in the South Pacific.

Ronald was the first one to call Lengai ‘My King‘, so the rest of us thought he looked the part and decided to follow suit.

Lengai and I spoke a lot about many things, but most often about the need for Indigenous Peoples to stop segregating ourselves according to region, race, or ethnicity – and start to speak more with one voice internationally – united in solidarity. I hold Lengai to be a brother to me now, and look forward to working with him in the future to promote the harmony we aim to spark in all quarters of the Indigenous ‘Fourth World‘.

What impressed me the most about the Maasai however, was their unwavering acceptance of who they were, they did not wear western style clothing because they were in New York City and wished to pass unnoticed by the maddening crowd, instead the Maasai wore their traditional attire with pride every day – and to everywhere they went. This is a lesson for the still mentally enslaved majority in the Americas – both Africans and Amerindians; who still have not examined themselves and come to the biter realization that they are not ‘living’ – but merely ‘existing‘ as ‘imitation Europeans’ in coloured skins – living under a ‘New World Order‘ of economic slavery.

I will never forget all the new Indigenous brothers and sisters I had to honour to meet at the recently concluded Seventh Session of the United Nations Permanent Forum on Indigenous Issues at UN Headquarters in New York City; USA (April 21 – May 2 2008).