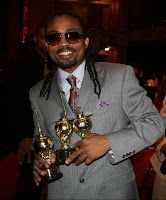 He promised “bigger and better in 2008” and soca superstar Machel Montano is living up to that promise, as he’s having perhaps his best year yet. Already a veteran of the music business and a legend in his country, Trinidad, Montano has been taking his taste of soca rhythms to the masses for decades and is now being recognized internationally for it.

At the International Reggae and World Music Awards (IRAWMA) held on Sunday, May 4th at the Apollo Theater in New York, Montano walked away with not only the most wins of the night but also the most coveted awards of the night. These include the Bob Marley Entertainer of the Year, Most Outstanding Stage Personality of the Year and Best Calypso/Soca Entertainer awards.

“I am totally overwhelmed and very grateful to the fans, the voters, and especially the awards’ committee,” stated an exuberant Montano. “It’s motivation to put in the hard work for bigger and better things to come.”

Montano has been blazing a trail in Caribbean entertainment since he was a child and is now on a mission to take his crafted and well-honed sound of soca to the worldwide audience.

He recently headlined back-to-back shows at the world famous Madison Square Garden in late March, played to fans last week in the Cayman Islands, is set for the “Best of the Best” show during Memorial weekend in Miami and another one at Six Flags New Jersey in July, and is gearing up for Crop Over Festival in Barbados at the end of the summer.

This week alone will find Montano on the set in Miami and Los Angeles as he shoots the video for his latest hit, “Defense – The Anthem,” with reggaeton star Pitbull and rapper Lil Jon. Then he joins Pitbull, Miley Cyrus, Flo-Rida and Snoop Dogg at the KIIS FM (L.A.’s #1 radio station) concert on Saturday, May 10th. All this while seeing the release of his new album, Wining Season, now available online and in stores.