POPULAR JAMAICAN PERFORMER ON THE ROAD AGAIN: BAD GYAL CE’CILE IS SO FLY

Danger Zone’s bad gyal, Ce’Cile has teamed up with renowned producer Scott Storch in collaboration with Beenie Man on the track titled So Fly. The track comes out of the continued relationship with Danger Zone and SoBe Entertainment.

Storch, known for his wicked instrumentals and credited with hits such as Lean Back by Fat Joe, Candy Shop and Just a Lil’ Bit by 50 Cent as well as Baby Boy by Beyonce and Sean Paul, has also produced for a variety of artists including Dr. Dre, Fat Joe, Nelly, Jadakiss, Christina Aguilera, Nas, Lil Wayne, 50 Cent, Beyonc?, Brooke Hogan, The Game, Chamillionaire, Chris Brown and many more.

“I have known Scott Storch for a while, he is really cool,“ Danger Zone/SoBe Entertainment recording artiste Ce’Cile stated, “I did the So Fly song to a hip hop beat at SoBe while he was producing Brook Hogan;

Beenie heard the song and loved it and we decided to collaborate on it after which Scott decided it would be more authentic on a dancehall beat which made it even cooler. I think the song will be accepted by regular Ce’Cile fans and will help me to continue making an impact on the international market.”

With her Bad Gyal album to be released in July, Ce’Cile has been busy between Jamaica and the US and recently appeared on New York’s HOT 97, Kay Slay and Pat McKay of Sirius radio and other radio stations in the NY as well as Connecticut’s Hot 93.7. She is also excited about the remix of her hit single called Waiting which features Shaggy and will be featured on her upcoming album. 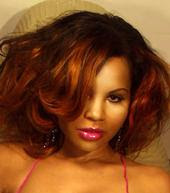 Ce’Cile Journeys to Europe for a one month tour in July to promote her album for that territory, She will return to the US in August, to start promotions for the North American Territory. She has continuously been an international ambassador for Jamaican music and takes this responsibility in stride.

Ce’Cile heads to the Apollo Theatre once again for a performance at the IRAWMA awards in the US where she has been nominated for Best Female Vocalist for her song Waiting.