Obskewer, Deadbeats and Mini-Burgers: Life along the eateries of Barbados’ South Coast

Thanks to Living In Barbados, I now know that there seems to be a club of deadbeats outstanding for high credit bills run up at various institutes along Bim’s southern coastline, you mean to say there is some kind of pride in owing and not paying?

Martyn indicated that the report is true, and that over B$10,000 is outstanding. He has decided that rather than name and shame to start discussing with other bars and restaurants on the south and west Coast and to circulate the names of the debtors between them. He is sure that many of the same names are going to pop up. He has also been well informed that many of the culprits have formed a “Boycott the Blue Bench” group, wishing that the establishment suffers the ultimate ill-fate of closing down. Some even boast of owing other bars for well over a year and have no intention of paying their debts. Martyn reports that the circulation of the list has created quite a stir, both whipping up support and drawing wrath, in the middle is the bar with a low customer count at the worst time of the year.

I know how convenient it is to run up a tab with a favoured restaurant, but I also know that I am getting credit, and that prompt payment is essential to help that enterprise stay in business. It’s the first time that I have come across this idea of “doing a runner” and not paying for meals.

However, Martyn then went on to discuss a different matter, that is further reaching, that of how small enterprises such as his are coping with increased costs. His restaurant faces a huge challenge with the price increases for flour, gasolene, rice, beef, rum and most everything else and soon to be chicken. He decided that rather than pass the price increases on to the customer at this time that Ackee Tree rotis, which are supposed to be 1lb should be that instead of the near 2lb version that was served before.Now the customer is getting that which is advertised. But wait. Now the complaints are abound that the rotis have gotten small and the prices have gone up. How do we win? he asks. Should he just pass on the price increases and put more pressure on the customer or stick to our advertised product.

He mentions that BS&T, which boast of million in profits is so price sensitive it has already increased the price of milk and other sundry items that has caused the pressure on the wider public. One would think that they are the ones who could absorb the increases for a bit longer than they have. It is indeed a challenge. 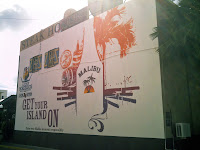 I may have my own views on the Ackee Tree, but I wish them well on tracking the perps!

The night Terry Mayers left this coil, I went to commiserate with former colleagues but got sidetracked – I ended up at Lucky Horseshoe in Worthing. Have you seen the new mural on the side of their building from Malibu? It is so classy, “Have you got your island on?“

LH-Worthing have karaoke on Wednesdays, I had a lot of fun – which I needed that night! I tried their mini-burgers; these are small patties with a snip of cheese and a dab of yellow mustard. I was reminded some reason of White Castle in the USA, they are quick to prepare and serve and very more-ish too! What is good that they are $20 or under, no digging of the pocket if you on a binge! 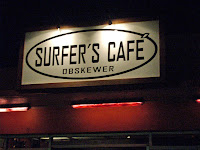 Lucky Horseshoe has always been tops in service, I know there are many who go for their bandits or the football matches, but their menu is highly underrated. Recently, they added to their repertoire – breaded fish sticks (very nice, comparable to Carib Beach Bar’s), breaded pickles (yet to try those) and other starters/appetisers or entrees available. Prices cool, food decent and staff there for you – plus sports and music videos, get to it!

There is a new obscure place in Oistins where I am yet to experience their cuisine, but I kept getting notices in Facebook, I saw their nightlife is rather decent for a Friday night… So I swung over by Surfer’s Cafe which is near Super Centre and is also known as “Obskewer” which was spelt that way on purpose, since it seems not well known they have kebabs as well!

I passed in one Friday when Garvie was entertaining the crowd with his usual stuff like Led Zeppelin’s “Stairway To Heaven,” plus guest appearances from Jay and Kevin. Jay is adding oldies to his list of songs to regale folk – he actually did a decent version of Ray Charles’ “Hit The Road, Jack” while Kevin did his Fray pastiche.

So a scrutiny of the menu of “Obskewer” is in the cards, folks, your friendly neighbourhood restaurant critic will let you know and if you are one of those fancy places? Remember, I have a SMALL budget – so if I eat for free I still wanna be able to review in a totally honest manner… Yup, bold am I not? Not only asking for a freeness, but possibly kicking you in the shins, en’t that what life is all about? LMAO!