I am sure you have heard of the Reverend Buddy Larrier of the AME Church who sent a letter to the media objecting to a phrase that has been used for so long.

In fact, using another word from not that long ago, there were some old-time Barbadians who said using the word BAJAN was as as bad as saying N***ER! (BTW: I believe that like I believe the Independence Arch is for Sale)

There is a claim it was a derogatory phrase invented by Trini’s (more slang in your nen-nen) during WW 2, and therefore should never be uttered – that sounds as ridiculous as the alleged origin of picnic which is false, there are NO racial connotations to it, none whatsoever – anyone who believes that is retarded themselves!

Anyhow, here is the letter where he objects to any word for young humans except children – BTW; I heard this argument since I was a pup/cub/knee-high to a grasshopper, etc.

Please allow me the opportunity to voice my concern as to some of the messages we are sending our children during Child Month. On Mother?s Day last as my church Allen?s Temple African Methodist Episcopal (AME) Church joined in the celebrations of appreciating mothers, I reflected deeply on my mother, now deceased, as my birth date, hers and my grandmother fell on the same date. After church I listened with interest to a radio interview with Alison Hinds about the joy and challenges of motherhood. It concerned me greatly that throughout the interview not once did I hear her used the word children, she constantly refer to our children as kids.

The disgust in this growing trend of referring to our children as kids appear to have had a deeper affect on me during Child Month. Mothers give birth to children, animals give birth to kids. Not so long ago our children were called, cubs and pups. We are commemorating the bicentenary of the acts that led to be abolition of slavery.

It therefore concerns even more when teachers and leaders in our community constantly refer to our children as kids. On Sunday nights the presenter of Caribbean Cuisine ? Duelling Chef, Mr. Peter Edey would only refer to the young people in that competition as kids, much in the same way as Alison Hinds in her interview. Are we totally unaware of the subliminal messages being sent to the children? If you continuously call a child a fool sooner or later he/she would act foolishly. If we get into the habit of referring to our children as kids sooner or later they would behave as animals.

My message to parents during the remaining days of Child Month is to stop referring to your child as a kid, and to children do not allow anyone, even your parents to call you a kid, your mother gave birth to a child. If it is unthinkable to call the offspring of a goat a child, why call our children kids!

I would appreciate if someone could answer the following three questions; who introduced the term kids? When was the term introduced? Why was it introduced?

May we have a successful Child Month.

Reverend Larrier, your argument is so stupid I am not sure why I even bothered to waste space except to punch holes in your dumb dispute. You have a problem with Alison Hinds? Then stop staring at she bumper, that is why you were listening for kids as you probably were thinking what could be done with her bumper!

Go on Google, look up either word… children or kids – there are so many noble organisations, black or white, UK or USA, out there and they refer to unformed adults as KIDS.

I was called a pup or cub, it is known as parallels of language – which is perfectly normal in the evolution of words and their use over the ages.

Nice in the 14th century meant you were retarded or worse and a duel would not be thought out of line, nice nowadays is abused and some people don’t take kindly to using that word nicely or not! 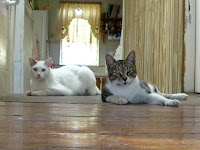 Twisting it the other way around, yes, I have called my pets my children – if you research this blog you’ll find I called two of them my sons. People who have a higher intellect have such a regard for their pets,that they tend to look at them as another member of the family! Like the Egyptians did thousands of years ago, but then cats never forgot, eh? LOL

So what is your beef, man? Grow up – the English lingo did a long time ago! Years ago, many folk would be unaware what is a 1: McJob, or 2: a jpeg, to 3a: upload or 3b: download files and so forth – should we go back to phrases like 1: low-paying job, 2: digital photograph and 3a & 3b: sending large streams of data between USB ports of computers utilising the services of the internet?

The whole point of my contention is that language like everything else evolves and you just have to accept it. Yes, as stated before I believe in Creation but via Evolution – there was not Adam & Eve but Australopithecus and Cro-Magnon, so tek dah – because God still had a hand in that too, ok?