Well, it must be fairly well known by now that Barbados has not really had a truly local restaurant critique – ever! In the sense that no one is brutally honest enough to say if it’s bad then is awful or if it’s good but here a few pitfalls to avoid, etc. When CBC ran a feature, they did everything but indicate how is the food, and even if they did – they usually lied as they want the places to advertise again (I was told this point-blank by some directors and presenters when I worked there)!

Until now, and wow! The last two items in this genre drew some of the most comments for the year so far…

But in an effort to maintain fairness, let’s point out a few things – if a fancy place like Cliff or Brown Sugar is hoping I’ll pop along and lay five stars on their crutch? The answer is only if you frontin’ honey! I stick to my budget, baby! Plus? If yo’ stank – then I have free reign to state so and why, DEAL? 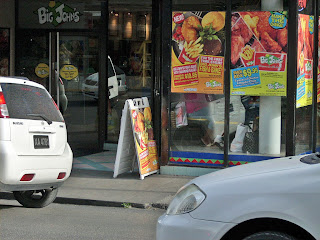 I will occasionally pass back at the more popular locales and see if there is a need to update… Like at Big John’s for instance, they have brought back dhal skins for their roti and cashiers ask you before they prepare the meal! 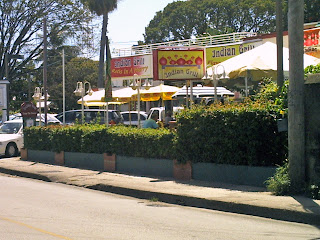 Saturday? I decided to head back for Indian Grill at 5:00 pm but they already had their sidewalks rolled up and so missed a late sale (That is not the 1st time, it seems they close by 5:00 pm, which seems a bit dumb to me), so that’s when I decided to saunter over by Kingston 10 for some Jamaican provisions, mon!

Me did ask for oxtail, with plenty plantain and stew pork with rice and pea, me wash it down with a Babylon Coke – the bill was $37.50, oy! 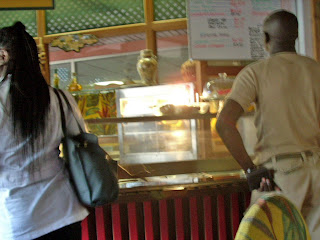 H O W E V E R: It was worth every penny at Kingston 10, I needed no Grace hot sauce. The pork was jerk just right and the oxtail was so deliciously rich and swimming with gravy, the plantain was sweet and tender without shredding under me knife and fork. The rice was all separate soft grains and the peas had only the merest hint of a crunch! 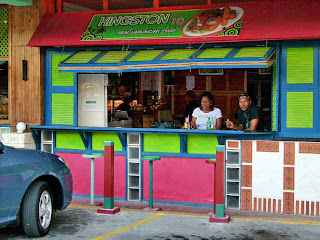 The service was swift and so friendly there at Pandora’s Plaza, it felt as though I was there all of the time rather than November or so when I last was there! 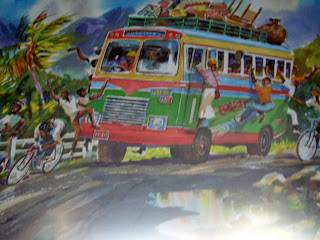 Kingston 10’s ambience has also improved, there were some Herbie Rose prints of Jamaican scenes to mull over, while customers kept rolling in and chatting with each other – advising everyone as to what to try, very cool!