Danger Zone continues to blaze a trail, setting new trends and taking dancehall and reggae music to new frontiers. Danger Zone is currently making preparations to shoot the video for Hot Long Time which features Junior Reid and Jah Cure. The Hot Long Time video is the next step for Junior Reid coming off his award for most improved entertainer at the recently held 2008 IRAWMA Awards.

Hot Long Time was produced by Steve “Rock Star” Morales for SoBe Entertainment; Morales is famous for his work on Pop Bottles by Lil Wayne and Birdman and also has production credits on songs by Celine Dion, Christina Aguilera, Enrique Iglesias, Young Jeezy, Fabolous, Big Pun, Fat Joe, and Mario to name a few. Indeed Steve Morales is as good as they come and his production work on the Hot Long Time track is outstanding.

Hot Long Time is new ground for Jah Cure who is most known for his culturally relevant reggae tunes. This is also the first time Jah Cure and Junior Reid are teaming up on a song and based on the final product won’t be the last.

“It’s been years I have wanted to work with Junior Reid and this is a manifestation of what we have been doing since he joined the Danger Zone/ SoBe Entertainment family,” 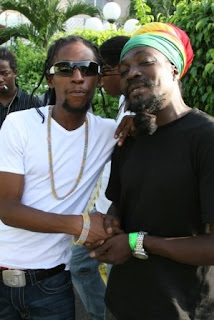 Jah Cure, Danger Zone/SoBe Entertainment Artiste observed, “I feel very good about the song and I hope the fans will like it as well. We tried something different on this track as there is no limitation to the music and we have always tried to work with different genres to take our music to the world.“

The song Hot Long Time features Jah Cure’s signature voice overlaid on a tight Hip Hop beat sprinkled with an essence of reggae. Junior Reid presents himself as a relevant artiste “ahead of the time” bringing fans back to a period when he was king and reinforcing the reason he is in such high demand internationally.

“Working with Jah Cure is a blessing as he is one of the most inspired artistes out there right now,“ Junior Reid, Danger Zone/SoBe Entertainment Artiste enthused, “Hot Long Time is a continuation of the work I have been doing with SoBe Entertainment and Danger Zone and there is much more to come.“

The video for the song Hot Long Time will be directed by Jay-Will who just completed filming Jah Cure’s last video Flyin High which featured American rapper and Sobe Entertainment CEO, Stack$. The Flyin High video was premiered on ‘420‘: International Herb Day (April 20, 2008) on WorldStarHipHop.com and broke the record with 50,000 views in 7 hours and 140,000 in 19 hours.

“It’s always a pleasure to work with Danger Zone and SoBe Entertainment,” Jay Will, Video Director stated, “The alliance is an ongoing relationship and I am presently working on a SoBe infomercial for Stack$ and some other projects with Jah Cure. The Hot Long Time video will be sizzling with special effects and imagery mimicking the songs lyrics. This is my first video with junior Reid and I feel privileged working with a legend like him and Jah Cure who is a legend in the making.“

The Hot Long Time video will be filmed between May 30 and June 4 throughout Jamaica and its release will be a good launching pad for Jah Cure’s European tour which begins in July.