Down by where fishing vessels go to rest in the Careenage as the sun takes a break, the Waterfront Cafe plays host to the launch of a spoken word CD; “ISLAND VOICES – ST CHRISTOPHER & THE BARRACUDAS, INTRODUCED BY EMMANUEL ‘FISH HEAD’ DE FREITAS (RET’D)” or Island Voices for short. 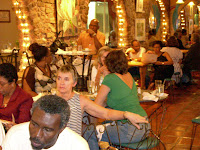 The crowd was many, among them Ian Estwick, Robert Sandiford and their spouses, plus theatre stalwarts like Wayne Cezair among a large turn-out.

Set on the apocryphal territory of St Christopher and the Barracudas, it is the dream-child of Philip Nanton, UWI lecturer.

He invited Rob Leyshon, another lecturer, to direct the way Island Voices should flow – the talents include Simon Alleyne who earned the Prime Minister’s Scholarship in Drama for 2004; Kay Foster who was one of the stars in the recent Barbados leg of the Vagina Monologues at the Plantation Garden Theatre; LauraLin Hutchinson, a former announcer at VOB when it started in 1981, now a social commentator in her prototype soap spoof “Holding On“; as well as Patrick Foster, painter/illustrator of the fantastic and mundane, reviver of the Caribbean Vaudeville or Cabaret at the erstwhile Ocean View Apartments in Hastings. 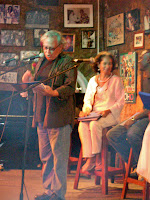 It is Patrick who is the leader of the ensemble, playing “Fish Head,” the retired Police Commissioner of the mythical island(s) and attempting to still be in charge with side-splittingly disastrous results.

The aspects of St Christopher are not so far from so many other islands in the here and now…During the second half, the packed to capacity audience witnessed Simon assuming the role of a gardener who on a Tuesday sought his week’s wages early so as to avoid jail for child support – while the tongue was lodged in the cheek, Nanton’s premise thru the voice of the gardener made easy sense.

How can you provide maintenance for a child if you are locked up? You are withheld from being of any use to anybody, far less the infant who needs it most.

Yet if “Fish Head” had his way, the man could wait ’til Kingdom come as this is not a good precedent to set for any other servant to observe.

LauraLin played the archetypical receptionist of the region, she is so intent to gossip on the phone that if a customer dared to ask where a book is at the Library, then they are given high scorn for daring to be such a rude interruption on a fine set of malicious talk going down. 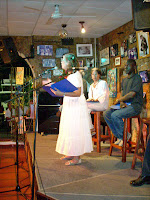 Kaye Foster’s character did NOT want a Mrs Maynard to join the church choir as the chorale’s reputation may be forever shattered – what was intriguing is that no reason was provided. The impression I was left with is that it was not race, looks, age nor money just that Kaye’s character wanted nobody that she deemed a stranger.

I loved how the other cast members silently shook their heads “NO” in assent to one of Kaye’s assertions over potential loss of revenue to the church’s funds if this woman was allowed to join.

What was the true highpoint for me is the take on radio stations of the region. While they are supposedly listening to a Vincentian station, it can just as easily apply to Barbados at either 98.1 or 95.3 – where dub played by Americanised and hip-hopped voices are the order of the day. 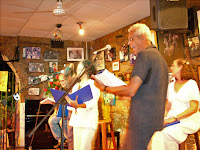 Even down to silly dedications (I never understood that even while working at either Starcom & CBC, a request just to hear your name? If you want it so bad, then buy a goddamn ad!), with dumb nicknames like “Long Guts,” and the rest of the crew imitating the instrumental jumble most deejays use in the background while talking for excessive periods.

Nanton was the announcer at T-17 who invited a traffic update from Corporal Sims (Simon Alleyne) who insisted on being proper in speech and was so far right he ended up left in recounting how a plane skated off the runway into a mini-mart (very possible in St Vincent). 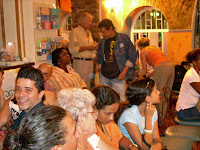 Meanwhile, “Fish Head,” as played by Foster, (Who it seemed was rather aloof afterwards, this was pretty unexpected, as he usually isn’t like that) stole the show at the end with a thunderously vex performance where he lost a chance to get a Prime Minister’s commendation or “…a Blackbird medal, if there was such a thing!” and he literally stalked right off of the stage to the crowd’s amusement.

Island Voices, the disc, is on sale at both Cloister Bookstores, The Book Place at Probyn Square in the City and the UWI Bookstore at Cave Hill, St Michael with more venues to be announced.