This year at BCC, they have combined Fine Arts & Graphic Design to create a Portfolio exhibition called INTRANSIT held at their Morningside wing. 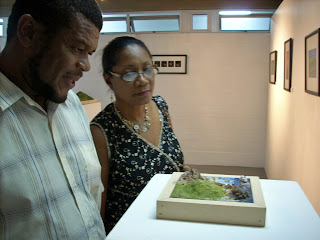 The introductory speeches from Principal Gladstone Best and the Minister of Education while meaning to be erudite, well-informed and entertaining had the crowd restless and bored – Bill Shakespeare’s Hamlet reference on being brief was far too apt that night, one member of the media got up and walked out from the speeches to go and look at the exhibition. 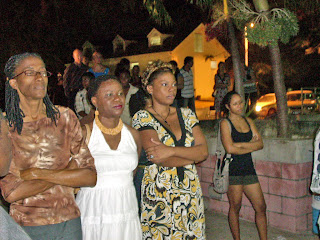 It was sad to see that all CBC has done so far with the exhibit is play a small piece of the lengthy discourse from the Honourable Ronald Jones, Education Minister. They did not even show a piece of the exhibit.

Dr Best’s main gist of his intro is the fact the exhibition covers three floors and runs only until the 15th and therefore encourages people to re-visit the exhibition as the time for display is so short. Why have it so brief? Did the students not deserve to have the school sponsor a month long exhibition at Sherbourne Centre (I’m not bothering with the long name, except to say Sandiford Centre from here on in – again, brevity is key!), could they not have worked a deal with some corporate entity willing to intern a graphic designer or two? 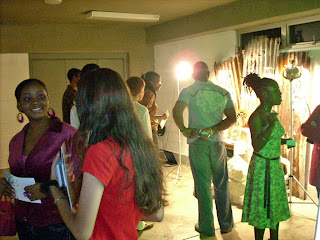 The minister’s monologue made extensive references to dance and music – what bearing did this have on Visual Arts which is the purpose of INTRANSIT? Mr Jones to his credit, did add that imagination should run wild and cited that many inventions over the ages have been created as a result of using the boundless scope of the mind. 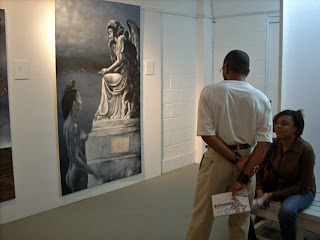 Mr Jones also noted that in his view, most humans tend to be selfish, so when an artist displays their work they’re really opening themselves to the world and we should appreciate that moment of selflessness. 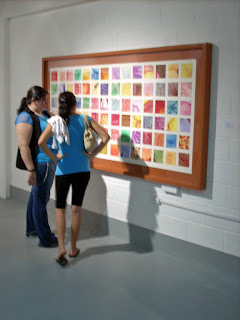 Twelve artists on display – not today Sunday nor tomorrow as that is a Bank Holiday – which leaves all of Tuesday, Wednesday and Thursday! I feel it is an insult to the students who spent not only a great deal of time preparing the work, but the very rooms where the efforts are placed for view – some students had to seek sponsorship on their own or beg/borrow/whatever from their friends & family to get their areas up to scratch.

If you don’t understand the work that was done behind the scenes, ask to view the video set to Gloria Gaynor’s “I Will Survive” where Mark Brown plays the lover who returns and Kamesha Webb as the singer who rejects the jilter, they even had back-up singers a la Gladys Knight & The Pips. There was also a photo-history set to Earth, Wind & Fire’s “September,” those kids really gave their all! 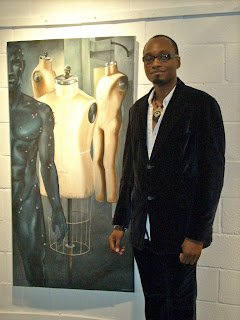 Three days does not cut it BCC, shame on you! 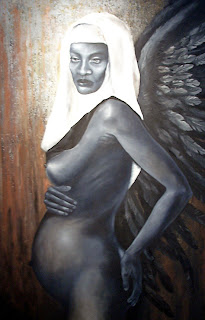 Let me convince you to get out there and show your support… The highpoint for me was “Angels In Crisis” from Antiguan Mark Brown. He really needs his own website, tell him so at goldeneyez34@hotmail.com 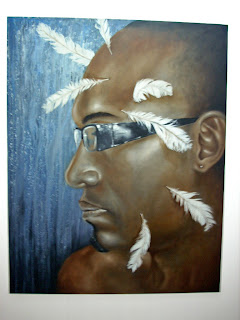 Mark Brown’s immense canvasses display angels in a manner probably not consistent with the Vatican, but have me tempted to write a story or book linking all of the pictures together in some fantastic manner! 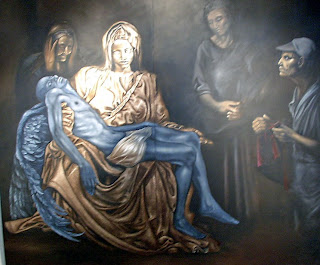 Pregnant angels, self portrait with feathers, even a study of Michaelangelo with Caravaggio-like figures added.

The twin-canvas panorama is based on “Pieta” and would be a beautiful introduction for a collector wishing to start their own private gallery. 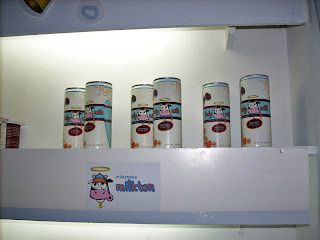 Danielle Archer created a new dairy product called “Holy Cow,” she even says if you really like the T-Shirts from this brand then you can e-mail her at danpro.graphics@gmail.com and work out all of the details. 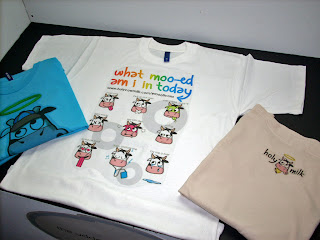 2gF is not a chemical nor is it a music scale, this is a music group allegedly starting a career, but in need of some slick presentations. 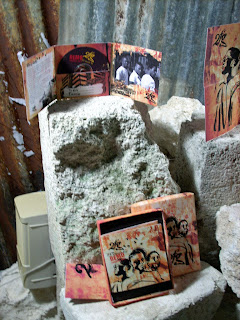 Enter Alex Carrington’s street-extreme representation of a new hip-hop group which earned a visit from former principal Dr Norma Holder, if you think you need his touch to design a CD cover? E-mail him at lex.carrington@yahoo.com 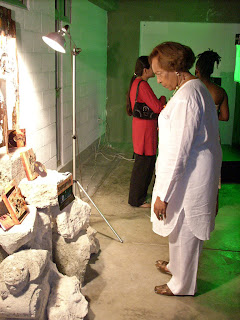 He also created a line of feminine products for teenaged girls known as Petal, not only worth a look but some serious thought! 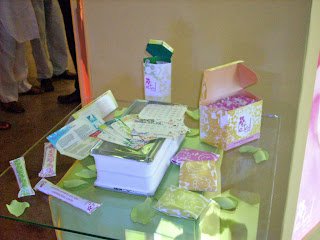 Another student whose work was definitely eye-catching was Sheena Rose. She has the distinction of appearing in two exhibitions at once! Her animation is also on display via video console at the Queen’s Park Gallery in “Sign Of The Times” (Which will also be under review here shortly, they have a longer display time – so BCC students 1st!), that’s where a dog takes her for a drive in a car and Police pull them over, LOL! 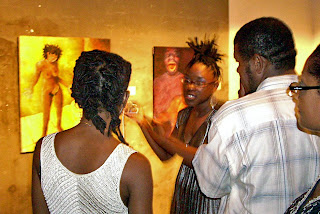 Likewise to QPG, Sheena has more monitors showing her animated representation of dreams she has experienced – one where she grew a penis over her vagina, or watching females use the Ladies room or even when she lost her two front teeth and two new blue teeth replaced those from before! Some of these digital moving pictures have also been translated to still canvas versions, if they seem rather surreal? There is a reason… 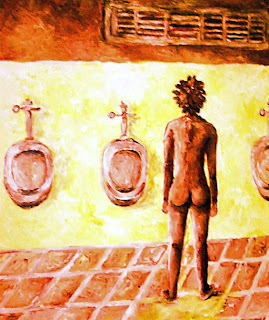 In her own words –

“My work is about dreams. Through dreams we reach into the dramatic, haunting, emotional and provocative qualities of the subconscious, and through my work try I to merge these impressions with things relating to my real life. While the work helps me discover more information about myself, it also leads to more questions and investigations.” 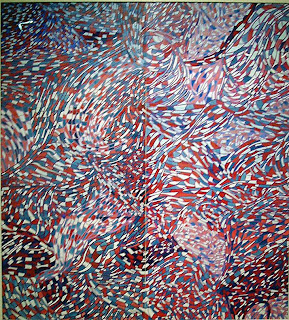 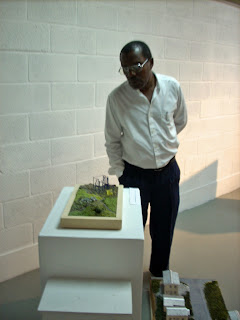 For the graphics side of INTRANSIT, the bomb was dropped by Shannon Kirton nee Gibbs who had some vehicles totally rad in some marine-durable vinyl appliqu?s making the truck and cars look totally hot! 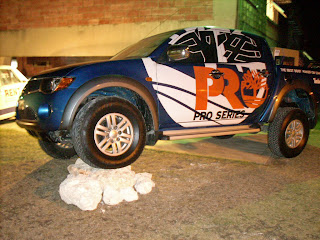 Her Fingerprint Designs (s_kirton@caribsurf.com) will soon be incorporated into her now-hubby’s KTI: Kirton’s Trading Inc. and the couple already see much public and private sector potential for her customisation of vehicles. 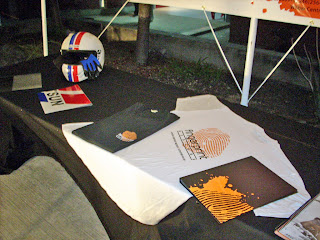 The design even went so far as gloves, helmets and notebooks! But the main draw would have to be the off-road pickup truck with Timberland decals! I have not even touched all of the show and you see why I am annoyed there are only three days for such glory? Don’t just agree with me, tell BCC too!