The ?Digicel Extra Cover? exclusive television show returns to the regional screen on May 23rd for the upcoming Digicel Series of West Indies against Australia. During the Sri Lanka Series the show proved to be clued-in to the action as it was the source of many correct predictions from some of the greatest legends of the game.

The 30 minute Show which made its debut for the West Indies vs Sri Lanka Digicel Series is broadcast in some 23 territories, hosted by sportscaster Barry Wilkinson and features a host of former and present stars of the cricket world. The winning format will remain for the upcoming Digicel Series against World Champions Australia. 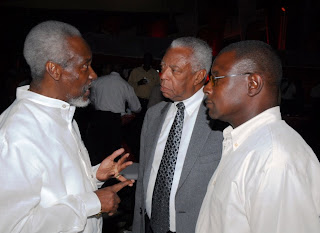 Only in the first ?Digicel Extra Cover? series, observations from one of the most successful spin bowlers in Test cricket history Lance Gibbs, on the need for Windies spinner, Sulieman Benn to give the ball more flight and variation, was seen as a bold prediction that bore out.

The prediction of the Great Sir Garfield Sobers that following the first Digicel test West Indies would win the Digicel Series against Sri Lanka, also proved to be on the ball.

Views of past Windies captain, Richie Richardson, who said before the Digicel series that he didn’t believe Sri Lanka were strong enough a team to beat the West Indies on home turf was also correct and provided great inspiration to the team and fans.

While the praise of former player, Philo Wallace, for Shivnarine Chanderpaul who he believes deserves to be in the top ranking of West Indies players for his consistent strong performance, showed to be very valuable by the end of the Sri Lankan series.

?We?ve had a fantastic line up of commentators and special guests for the Sri Lanka run of the ?Digicel Extra Cover? show and we are planning equally exciting shows for the Digicel Series against Australia? said host Barry Wilkinson. ?The show also allows fans to get a chance to share their views, have their say and even vent their frustrations which has also led to some colourful commentary!?

The Digicel show which is running for 13 episodes in total also includes footage from the various matches, along with the action from the Digicel Scotiabank Cricket Experience. The show also features exclusive interviews with players from both teams as well as video diaries from select Windies players.

As a special feature for fans of the show, viewers will be able to relive some short clips of the most topical points on Digicel?s renovated and highly informative website.

Fans can contact the show directly at Barry’s new e-mail address, and are advised to check the website for the relevant show dates and times in their region.