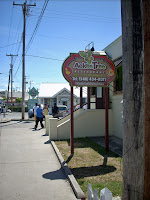 As this News-Blog is about Barbados and set in the Caribbean, is only natural every now and again to look at things Bajan/C’bean… Such as the time I pondered about a soft drink flavoured like a roti, but better yet, a look at the roti in Barbados itself.

This drew many comments, many of which ask me why I didn’t look at Ackee Tree now in Hastings by Coconut Walk. I decide to see for myself what the fuss is about!

I like how the staff truly reflect the diversity of the Caribbean, the decoration and ambience make for good comfort as you (try to) enjoy your meal.

It is true – the owners are always on hand; the staff have great powers of recall as they recite the menu from memory alone; a drink is one size in a large glass with free refill(s)… 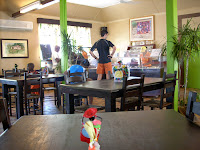 However, the meal itself is a different story and the vanguard which makes or breaks a decision on a return there.

I went there for the first time about 3 weeks ago, and felt rather than go for a roti – I’d try the Curried Goat (I saw a famous Jamaican attorney having the same and was prompted to do likewise), and had white rice/ eggplant/ pumpkin/ stewed tomato with the popular Jamaican dish.

I have been told subsequently that this is normal, but I kept spitting out shard after shard of bone – to the point I wondered if I ordered curried Bone? 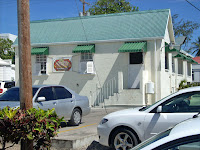 Maybe I was over-reacting, I thought, so I caught the eye of the popular Jamaican attorney before she left and asked what she thought of the goat?

“I can cook a much better meal,” she murmured in their characteristic lilt and swiveled gracefully out of the establishment.

This was not a good sign, I then started to worry about my bill as I had 4 Pepsies! I still tried a brownie for dessert… That was Heaven, for sure! The square came with dark chocolate and raspberry swirls on the plate. 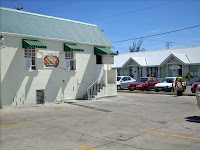 Then? After all else could not be avoided, the bill…

I decided one more try is in order, as I was yet to have a roti from there, and I finally got the gumption yesterday.

I had a pork roti with kuchela (they understood, thanks be), as well as eggplant, potato and some pumpkin in it. 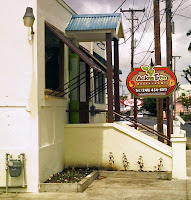 The pastry seemed dhal-ish but not directly so, the size was a little bigger than Chefette’s, and the curry’s flavour was present but not outstanding.

$19.40 for that attempt, left a tip of .60 cents, and will do my best to stay with Indian Grill or IV Play Deli and use Chefette or Big John in desperation! Great service and nice ambience do not compensate for a meal that could be way better, ok? Sorry Kevin, but Ackee Tree bombs in my book!