Damon Corrie is busy again, now the UN conference is over – this time, he’s thinking locally and, as always, ecologically… He has a fear that some of the East Coast or a dependency thereof may be up for grabs if the price is right? He is creating a petition for all Bajans to fill out –

What to do
Write to:

Or fax your letter to: (246) 228-4386
For cheaper & faster action you can also e-mail your letter to the Prime Minister to:
nationnews@sunbeach.net
news@barbadosadvocate.com
dheat@caribsurf.com
news@starcomnetwork.net
news@cbc.bb
Getting the local media involved is always helpful in applying ‘polite pressure‘ on the Government.

Thank you for helping to save Culpepper island

Culpepper Island is the only unspoilt offshore land area left belonging to the Independent country of Barbados (a former British colony and now member of the Commonwealth), there is a persistent rumor that a wealthy foreigner is trying to acquire it from the Government to ‘develop‘ the tiny bit of real estate (Less than 1 acre in area!) into a ‘spa’ or some other nonsensical scheme for the pampered and vain.

Culpepper island was enjoyed in a sustainable way for over 3,000 years by human beings – from the time of the first indigenous settlers of the island of Barbados (of whom I have found pre-Columbian artifacts on Culpepper) – right up to the present generation; and for thousands of years before that, and up to the present, by native shore bird and crustacean species who continue to live there free of introduced predators that exist on the main island.

Prime Minister Thompson announced on Monday May 5th that the entire Eastern coastline from Skeete’s Bay north to Pico Tenerife in Barbados would be granted a greater degree of protection from further ‘development‘, and while this is indeed good news, Culpepper island sits in the very next Bay to the south of the proposed protected area; I am beseeching Prime Minister Thompson to extend the zone of protection a mere 1/2 a kilometer further south to include the pristine Culpepper island with its myriad of limestone tunnels and caverns and lush surrounding wooded bay – 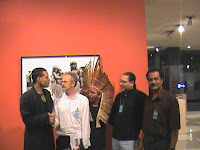 which is fed by a freshwater spring & is itself home to a troop of Barbados Green Monkeys – a species proven to have evolved into becoming genetically unique to Barbados over a 300 years time span.

My voice alone in this country of 250,000 persons will not save Culpepper Island, only the voices of concerned persons from around the world will save this small, but unique natural inheritance for present and as yet unborn generations of humanity.