This event promises to be one of the most exciting events for the summer holidays, it will take place at the Rickie’s Motors car park in Negril Spot in the parish of Westmoreland. Among the lineup for Western Bembe Invasion is a raft of topflight selectors from the very popular Bembe Squad such as Razz & Biggy, Richie Feelings, Jigzy & Penny Bling. Also in the mix are IRIE FM radio personality The Dancehall Master GT Taylor along with his GT’s Aggregation sound system, home town favourites Hard Rock sound system and Country Tiger Sound. 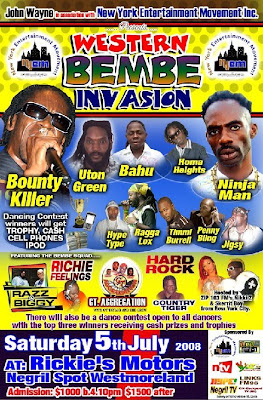 In true Bembe style, Western Bembe Invasion will also feature performances from two Dancehall music giants Bounty Killer and Ninja Man. Patrons will also see performances from talented newcomers such as Bahu, Homa Heights & Hype Type out of the New York Entertainment Movement camp, Ragga Lox and Utan Green. There will also be a dance contest open to all dancers, with the top three winners receiving cash prizes and trophies. Several lucky patrons will have a chance to win prizes on entering the event.