Movie-goers will soon get their chance to see the film that?s been making waves with audiences and media across the Caribbean. Frances-Anne Solomon?s A Winter Tale, which stars Barbadian-Canadian actor Ryan Ishmael, along with a host of Caribbean stars including Jamaican icon Leonie Forbes, Trinidadian stand-up comedian Dennis “Sprangalang” Hall, and Canadian-Jamaican star Peter Williams, will continue on its journey, and head to theatres in Barbados at the end of May. The film will make its premiere with a launch screening on May 21 at Olympus Theatres. A Winter Tale opens for general release at that cinema the same day.

Born in Canada to Barbadian parents, Ishmael calls A Winter Tale his proudest accomplishment to date. ?I?m excited to be able to share my work on this movie with family and friends in Barbados,? said Ishmael. ?A Winter Tale tells such an important, universal story, and I am so proud to be a part of it.?

The film?s Barbados release is the third in its Caribbean tour. It is generously sponsored by the Trinidad and Tobago Film Company, Skywritings and Caribbean Beat. 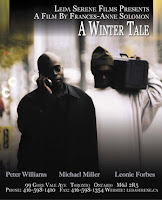 A Winter Tale opened to critical acclaim in Jamaica on April 9, with Robert Gregory of Jamaica Trade & Invest calling it ?a compelling story of struggle, survival and healing,? and ?a quality production relevant to the times.? The movie will open in at cinemas in Trinidad on May 15. On May 22, A Winter Tale launches in Antigua, where it will also open in theatres.

Written, directed and produced by Solomon, A Winter Tale tells the moving story of a Black men’s support group that forms at a local Caribbean restaurant after a young boy is killed by a stray bullet. With a plot that revolves around the universal issues of gun violence and drug use, the film beautifully captures the day-to-day emotional struggles of this group of individuals.

Over the past year A Winter Tale has traveled the world, garnering rave reviews and international recognition through film festivals in countries such as Canada, The United States, Trinidad, England and Germany.

A Winter Tale has had the honour of opening and closing a number of festivals, and was most recently selected to kick off the 15th annual African Diaspora Film Festival in Manhattan.

Frances-Anne Solomon is an award-winning filmmaker, writer, director and producer. She is the president and artistic director of the two companies she founded: Leda Serene Films and CaribbeanTales, and has also worked as a film and television drama producer for the BBC.

Ryan Ishmael was born and raised in Toronto, Canada. He was bitten by the acting bug at the tender age of 8, after being cast as Rudolph in Rudolph the Red Nosed Reindeer. From there, Ishmael went on to star in numerous stage productions through both school and church. Selected credits include a guest spot on the television crime drama Crimestoppers, and a stage version of Up the Down Staircase where he starred as Joe Ferone.