Stanford 20/20 noted with interest a recent article in the Sunday Telegraph which made certain claims with regard to funding for the territorial boards which participate in the Stanford 20/20 Tournament.

The article contains gross inaccuracies and Stanford 20/20 wishes to clarify these and let the facts be known as follows:

1. In the initial year of funding each territorial board received US$100,000 as start up money in order to prepare their players and upgrade their facilities.

3. At the Stanford 20/20 Board Meeting in November 2007 a decision was taken by the Board to suspend the funding as outlined in 2 above as a result of a lack of accountability by some of the territorial boards.

4. At the Stanford 20/20 Board Meeting in March 2008 a decision was taken by the Board to resume funding by way of a restructured disbursement scheme in order to ensure a higher level of accountability.

6. There are some territorial boards which currently do not have their accounts in a satisfactory manner. Once a satisfactory level of accountability is achieved for funds already disbursed to them then the funding will continue under the new disbursement scheme as outlined in 5 above. 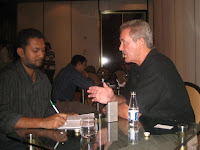 Further Sir Allen and the legends continue to work tirelessly to ensure that this is achieved with urgency and Sir Allen has already dedicated in excess of US$80M towards this.

Finally Sir Allen and the legends are constantly exploring new, creative and innovative ways in ensuring that West Indies cricket remains acutely relevant and a force to be reckoned with on the world stage. To this end Sir Allen in conjunction with the West Indies Cricket Board will shortly announce some exciting initiatives which are guaranteed to have the eyes of the cricketing world firmly focussed on the West Indies.