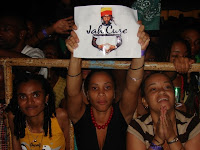 Due to the overwhelming demand for Jah Cure in Europe, the second annual staging of the CureFest Festival slated for this summer has been put on hold. Last year, Danger Promotions in association with Brass Gate and Iyah Cure Promotions presented what was considered to be one of the best shows ever held on the western side of the island. Since the staging of CureFest in October 2007, Jah Cure’s career has grown by leaps and bounds and for the last six months Cure has been touring consistently.

Delmar Drummond, CEO Danger Promotions, explains the decision: “The demand for Jah Cure is extremely high right now. So many promoters from all over the world have been requesting him to perform. We decided to venture to Europe to give him more exposure there. Unfortunately the dates of the Europe tour coincide with the dates proposed for CureFest 2008. We are hoping that we still may be able to host CureFest after the Europe tour but we cannot be sure just yet. If not, we will definitely schedule it for next year as we are committed to making CureFest a calendar event in Jamaica. We apologize for all Cure fans who looked forward to CureFest this year.”

CureFest 2007 was the 3-day event staged between Friday October 12 and Sunday October 14, and began with Jah Cure’s birthday celebration dubbed Reflections at the Starfish Hotel. This was followed by 45 Cure’s on Saturday October 13 at Pier 1, Montego Bay where Radio DJ’s and sound systems came out to show their support. The event climaxed with the Longing For concert at the Trelawny Multi-Purpose Stadium on Sunday, October 14 where Jah Cure performed a full set for the 1st time in Jamaica in 8 years. Over 20,000 fans attended the CureFest celebrations over the three days and the promoters and Jah Cure himself are still thankful to all his fans that came out to make the event a success.

Jamaican fans need not be disappointed however, as Jah Cure will perform on Sumfest Reggae Night, Friday July 18 in Montego Bay, Jamaica. Jah Cure’s presence as one of the headliners on Sumfest 2008 is further validation of his veritable talent and immense popularity not only locally but internationally as well.

This June, Jah Cure will begin his first full European Tour. This will be the biggest tour Jah Cure has done to-date and will take him to all the major cities in Europe including states in Scandinavia. Based on the overwhelming number of request for Jah Cure to perform in Europe it was felt that the time was right for a major tour on that side of the world and the decision was made to postpone CureFest. The promoters of CureFest are assuring fans that when CureFest returns it will be bigger and better than its inaugural staging.