It isn’t official yet, but sources indicate Zedstar is working on a new music video with a gore-flick girl: Krista Grotte. 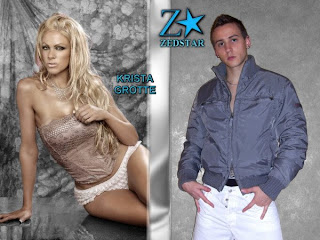 She’s a 5 foot 6 inch tall blonde model and actress. She’s worked for Enigma Films as an actress in some of their horror movies, so she’s considered an up and coming “scream queen“.

But she’s jumped from horror pictures into a pop music video, which is a truly rare step.

They say the entertainer was surfing the web while he saw a nice girl and contacted her to participate in the video. Love at first sight.

However on the “Let my hands wander down” singer’s website there doesn’t seem to be any news about it, but his fans will have soon word because it seems Zedstar will be interviewed the next week on a music TV channel.

After the collaborations with two of the most important female singers of the world (Rihanna allowed Zedstar in her “Unfaithful” video and Britney Spears had Zedstar appear in the “Break the ice“ vignette), Zedstar is finally working for the release of his first album.