To The Left, to the left… Beyonce had a run-in with Jay-Z: first quarrel post wedding

After their secret wedding in New York on 4th of April, Beyonce and Jay-Z had their first squabble as man and wife.

It seems as though they had a fall out during the Hollywood Bowl’s gig in Los Angeles this week, when Jay-Z told to the deejay to stop playing her hit, “Crazy In Love“.

The rapper was there to support Barack Obama.

Sources report that he grabbed the microphone and jokingly said: “F*** that. Sorry, Bey, but f*** that. Let’s play something else“.

It was evident that he was kidding, but she didn’t like it at all and didn’t find it funny in the least. 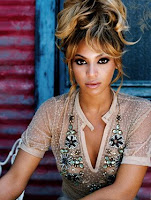 So, when they came off stage, she confronted him demanding to know what the hell his comments had been about.

However Jay-Z calmed his wife with some apologies and many compliments, so “love” was restored.

After the show the couple is been seen at a private dinner with about 40 persons.

There were their friends and families, including other stars like Michelle (ex-Destiny’s Child) Williams, Mary J. Blige and new mom Christina Aguilera.