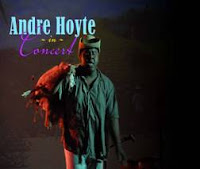 One of Barbados’ most promising classical voices Andr? Hoyte will give a recital at the Frank Collymore on the 4th May under the distinguished patronage of the Brazilian Ambassador, His Excellency Orlando Galveas Oliveira.

Hoyte, who is fast becoming a household name in Barbados and the region, is excited about performing at the Hall after his debut recital there in 2004. A past member of the Croydon Operatic Society of Surrey, England and the Sine Nomine singers of Barbados, Andr? has been giving private performances to dignitaries and much of the rich and famous in Barbados; the private islands of the Caribbean such as Mustique and Canouan; in England and the United States of America. While Hoyte enjoys performing at this level, he admits that performing at the Frank Collymore Hall gives him such joy, since the connection with the audience always leaves him on a high note.

The recital will feature works from Operas by some of the world’s most famous composers such as Verdi; Flowtow; Massenet and Andre’s favorite composer Puccini. It will comprise of Classical Arias; Popular Negro Spirituals and works from the musical Phantom of the Opera.

He will be joined by Sopranos Norma Bowen and Gaye Gajadhar as well as pianist Roger Worrell.

The concert is in aid of this young Artists’ Musical Development Programme, which will include attendance at international master class voice workshops and the launch of an up-coming CD.

Tickets for the concert are available from CS Pharmacy in Bridgetown or from Andr? Hoyte at 230-4091