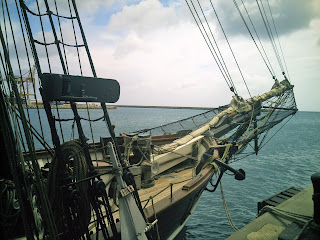 Luckily, I do not suffer from motion sickness – otherwise my visit to the Amistad may have been all too brief! It was time well spent examining and experiencing a replica of very significant history that may never pass our Barbadian shores again – 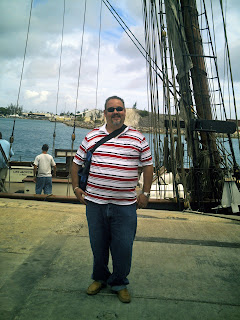 In 1839, slaves aboard a ship called the Amistad revolted to secure their freedom while being transported from one Cuban port to another. Their leader was Sengbe Pieh, a young Mende man, but popularly known in United States history as Joseph Cinque. The slaves had been kidnapped mostly from the neighborhood of the Colony of Sierra Leone and sold to Spanish slavers. They eventually received their freedom in 1841, after two years’ internment in the United States awaiting the verdict of the courts regarding their “revolt” This was the celebrated Amistad Case, an episode far better known in the United States than on the other side of the Atlantic. But the incident had a far-reaching impact on both sides, influencing the course of American history and especially the development of Afro-American culture, while, in Sierra Leone, leading to the inauguration of American missionary activity that trained many of the elite group that led the nationalist movement to achieve independence from colonial rule. 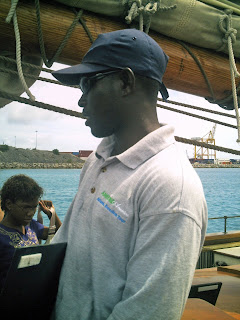 This was what our guide more or less told us, so to say the Amistad was a slave ship was actually inaccurate. The current crew of the vessel has five members from Sierra Leone on board (another crew member had rings in her ear like a Bajoran and she said it was Star Trek that got her interested in a seafaring career) – the same as where the 53 people torn from their homeland originally hailed from back in 1839. 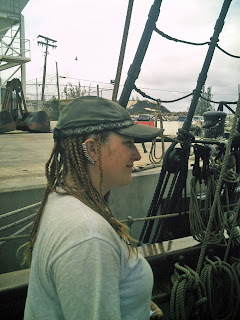 The trip to Puerto Principe usually took three days, but the winds were adverse. Three days out at sea, on June 30, Sengbe used a loose spike he had removed from the deck to unshackle himself and his fellow slaves. They had been whipped and maltreated and, at one point, made to believe that they would be killed for supper on arrival. Sengbe armed himself and the others with cane knives found in the cargo hold. He then led them on deck, where they killed Captain Ferrer and the cook Celestino and wounded the Spaniard Montez. But Sengbe spared Montez’ life together with those of Ruiz and Antonio, the cabin boy. The mutineers lost two of their own party, killed by Captain Ferrer. The two white seamen managed to escape from the Amistad in a small boat. 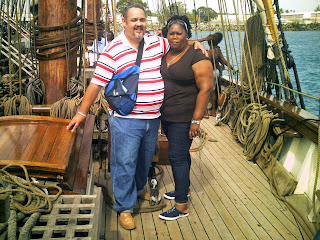 My wife befriended one of the crew from that great African state as well. This crew member told us apart from Ghana, many Bajans have ties to Sierra Leone. 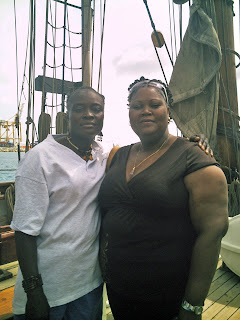 Looking at the 35 who survived I saw many prominent Bajan features too. Survival of traits and genetics definitely came from these proud strong people, here is an example of true and noble leadership – 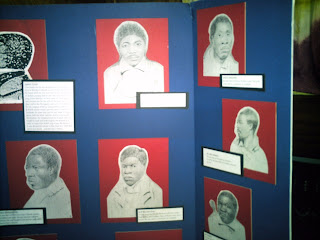 Sengbe then ordered the Spaniards to sail in the direction of the rising of the sun, or eastward towards Africa. At night, however, Montez, who had some experience as a sailor, navigated by the stars and sailed westward, hoping to remain in Cuban waters. But a gale drove the ship northeast along the United States coastline. The schooner followed a zigzag course for two months, during which eight more slaves died of thirst and exposure. Sengbe held command the whole time, forcing the others to conserve food and water, and allotting a full ration only to the four children. He took the smallest portion for himself. 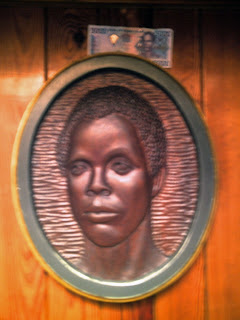 The quarters are very cramped and small, it is only on the rigging where you have a sense of open air to appreciate. 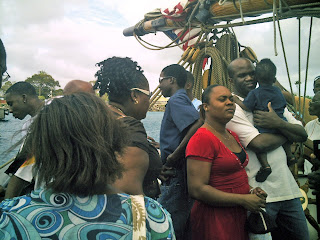 All of the bunks on board have a special plank placed at the side, if it wasn’t there and they ventured into high seas they may pitch out of a heavy nap, not nice if you have the top bed, eh? 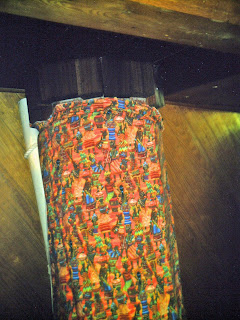 Below decks, there are many tributes for the brave blacksmith, some made in America and others in Sierra Leone – cloth wrapped a post and originated from the 53 Africans’ birthplace. The vessel is heading for Charleston next month. 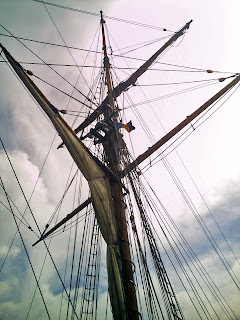 The Amistad Committee recognized the need for a public figure of the highest standing to plead the cause of the African captives before the United States Supreme Court. The abolitionists persuaded former President John Quincy Adams to lead the defense. At seventy-three, and thirty years out of legal practice, the ex-President was reluctant to accept the case, lest he should jeopardize the lives of the Africans by failing to win. He wrote in his diary: 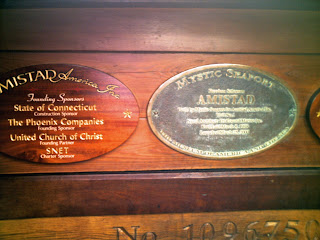 The world, the flesh, and all the devils in hell are arrayed against any man who now in this North American Union shall dare to join the standard of Almighty God to put down the African slave trade; and what can I, upon the verge of my 74th birthday, with a shaken hand, a darkening eye, a drowsy brain, and with my faculties dropping from me one by one as the teeth are dropping from my head — what can I do for the cause of God and man, for the progress of human emancipation, for the suppression of the African slave-trade? Yet my conscience presses me on; let me but die upon the breach. 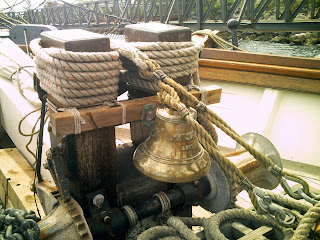 Thus, Adams accepted the sensational case that came to be called “the trial of one President by another.” Attorney Baldwin prepared an elaborate defense and opened the case, but on February 24, “Old Man Eloquent,” as Adams came to be called thereafter, addressed the Court for a total of four and a half hours. On March 9, 1841, the United States Supreme Court issued its final verdict in the Amistad Case — the captives were free! Adams sent word at once to Lewis Tappan, the principal leader of the Amistad Committee: “Thanks — Thanks in the name of humanity and of justice, to YOU.” 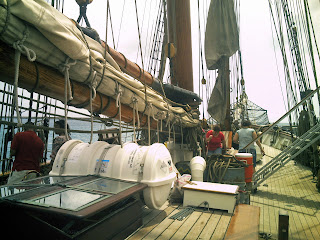 Based on a true story. Know your Hollywood/history?

1. What does ‘Amistad’ mean in Spanish?

2. What does Cinque’ use to open the lock?

3. Which politician helps the cause?

4. What’s the name of the newsletter published by the abolitionists?

(#) The Emancipator
(#) The Abolitionist
(#) The Freedom Sheet
(#) The Liberator

5. Who was President of the United States?

6. Where is the slave fortress?

8. Which real life Supreme Court justice played in the movie?

9. What does Cinque’ give Baldwin at the end of the movie?

10. Where was Cinque officially sold as a slave? 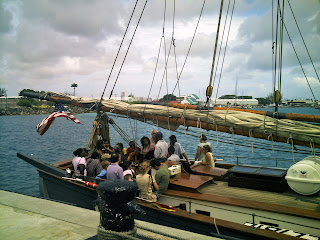 The fact is that the ship, in whatever form – replica, original or representative, has survived and now the word AMISTAD has in the end lived up to its true definition of FRIENDSHIP. Uniting men of all hues and all beliefs along the way. I thank God I could witness it.