Director of Agriculture in the Nevis Island Administration (NIA) Mr. Kelvin Daly revealed that under the new Administration the Department had improved agriculture on Nevis, which has made the island the envy of other countries in the region. 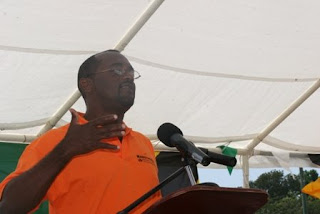 Mr. Daly made the revelation at the Villa in Charlestown at the opening Ceremony for the 14th annual Agricultural Open Day under the Theme: “Micro Farming: The Driving Force for Agriculture Past, Present and Future.”
?Many islands in the region have called for advice from Nevis because they recognise what we are doing is significant. In the next two weeks we would be having a group from Anguilla who are concerned about returning to farming 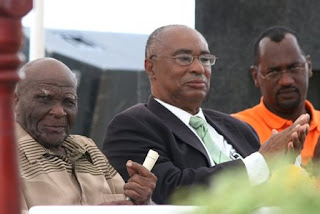 ?It?s amazing how much resource was put into other areas and agriculture was left on the doorstep but the times are changing and what we?re saying all along is proving to be true you can?t turn your back on agriculture. We in Nevis are positioned to leap forward ahead of the region despite criticisms that we are not doing enough in agriculture,? Director Daly said
Dr. Daly expounded on the importance of micro farming which he said was more than planting plants in the backyard. He said the Department had on display an extension of varied micro farming methods.
?We are trying to get away from the term dubbed backyard farming because it embodies much more than what you plant in your backyard. Now we are looking at all the displays in the extension divisions, you are going to see all variants of backyard farming or micro farming.
?On display are potted gardens, Aquaphonics Hydroponics that are adaptable to the elements of backyard conditions. What you are looking at is a potential for fish farming and vetri farming together because we have strained our resources in the fishing industry and we are looking forward to fish in abundance again,? Mr. Daly said. 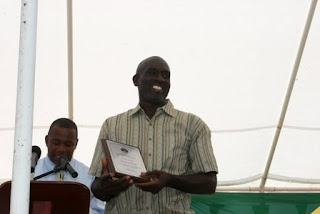 Mr. Daly indicated the three basic requirements needed for growing plants were oxygen, water and nutrients, saying homeowners were without excuse to pursue micro farming. He reiterated the need for the people of Nevis to invest their time into growing their own food crops that were considered healthy and safe.
He expressed that the World Bank and the International Monetary Fund (IMF) indicated governments needed to invest more money into agriculture. He further dispelled that Nevis was self sufficient in pumpkins, squash, tomatoes, green peppers and cabbages.
?We have even gone so far to export pumpkins on the Dominica boat. They have come here and bought pumpkins from us. That?s how far we have progressed in 16 months. We are also exporting citrus to St. Maarten, especially seedless limes.
?We have exported golden apples and mangoes. By the year 2010 Nevis would not import bananas or plantings. We are doing this because we know it?s important for food security and the crisis in the world now is showing exactly that,? Dr. Daly said.
Director Daly proposed the idea of a national consultation to be held to address the animal pest control. He referred to the Inter American Institute for Cooperation on Agriculture (IICA), Caribbean Agricultural Research and Development Institute, (CARDI), The Department of Agriculture, the Veterinary Division on St Kitts and the animal rescue groups in the Federation to collaborate to arrive at a general consensus about the predation and animal control on the island. 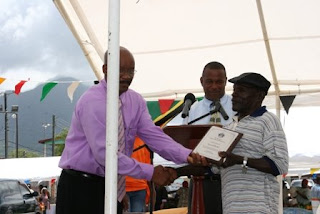 He gave accolades to the Department?s workers for their limited production despite insufficient capital resources.
?Mr. Premier what we lacked in capital resource we have more in people power working for the kind the lowest wages, yet we hold our own and we counter produce under circumstances. We criticize immigrants but the Department?s workforce is a mosaic of people. I would not trade them for anyone. They are decent people, beautiful people hardworking and selfless and I give thanks to God for them,? Mr. Daly said.
On hand to witness the ceremony was Patron of the two-day affair, Mr. George Sutton who had contributed to the field of Agriculture on Nevis for 41 years.
Presentations were made to the Department?s Agriculturists for their sterling contribution to the Industry. 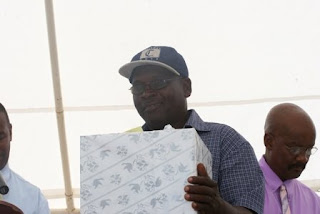 Mr. Donald Daniel received two awards: Crop Farmer and Most Throughputs for Marketing for 2008. Mr. Clayton Liburd received the award for Livestock Farming; Mr. Samuel Burke for Most Throughputs at the Abattoir and Mr. Clivin Christmas for Fisheries.