Magnum Showdown Looms: only two will come out victors at the grand finale of the Magnum Kings and Queens of Dancehall competition

It’s down to the final four and the phenomenal popularity of Magnum Kings and Queens of dancehall has justified the decision of the producers and sponsors to bring authentic Jamaican music and talent to prime time television. The pulse of Magnum Kings and Queens of Dancehall is beating in every alcove and crevice of Jamaica and over the past thirteen weeks numerous contestants have graced the Magnum stage. Now, the competition is down to its final four contestants and it’s anyone’s guess who will be crowned the ultimate King and Queen of Dancehall tonite!

Magnum Kings and Queens of dancehall has as it’s mandate to [buss=expose] new talent and the four finalist left in the competition have demonstrated a level of diversity and talent that rivals many of their contemporaries.

When you hear the cry “Rasta, Rasta, Rasta” all ears know who is on the stage; hailing from Clarendon Singer Jah, originally from St James has music running through his veins. The brother of reggae artiste Ginjah, Singer Jah credits him with being his main inspiration. Confident of his talent, Singer Jah is sure of his future in the competition and has the entire Buckner and May Pen beside him.

“I am confident of winning the competition with the almighty who will guide me through,” Magnum Competitor, Singer Jah said, “The competition highlighted me and made people know me and without it a lot of people would not see that Singer Jah has true talent.”

Another of the four finalists is a 24 year old Taurus called Senita who calls Portmore home. Senita has a hard act to follow with his neighbours being Mad Cobra, Vibes Kartel and many other dancehall artistes who hail from the same area.

The prince grew up in St Mary but now lives in Christian Gardens Portmore, St Catherine. Senita claims influences such as Tanya Stephens, Assassin, Buju Banton and Spragga Benz and heralds “I’m a Mogul” proving his majesty by proliferating a host of conscious, lyrically potent and eclectic dancehall tunes.

Magnum Kings and Queens of Dancehall provides equal opportunity to both men and women and as such both a king an queen will be crowned this evening. There are two princesses left in the competition but only one will take the crown. Baby Tash one of the two is a Sagittarian hailing from Kings Street in Spanish town, 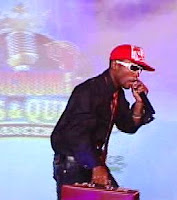 the 23 year old has shown her versatility on the magnum stage providing witty and gritty dancehall lyrics to the joy of the masses.

Not to be outdone is her competitor Mona Lisa who currently resides in Negril. Mona Lisa has proven her mettle winning last weeks square of with Baby Tash in the all female clash. Mona Lisa also has music running through her veins being the brother of popular western Jamaica DJ, Mr. Peck.

Lisa wants to emulate the success of Beenie Man and Lady Saw and based on her present form achieving this aim is a distinct possibility.