On May 17th, 2008, local DJs, musicians and music industry professionals, friends and fans will gather at Plantation Theatre to raise funds for a British-born DJ and “musicologist” of long standing? Mr. John Barry.

Anyone listening to local radio in the 80’s, especially the launch of CBC’s Radio Liberty (broadcast from a van in CBC’s courtyard) will remember John’s mix, as he introduced Barbadians to Maxi Priest and showcased Aswad, UB40, and a host of other reggae bands as well as local performers like Gabby, Grynner, and Adonijah. Of course his play list often included some classic rock from his voluminous LP collection and some commentary from his equally encyclopedic musical knowledge.
Others may also be familiar with his work as sound and lighting designer/technician for many of Barbados’ theatre productions, or his work as a distinctive voiceover for many TV and radio commercials.
After stepping away from the music scene somewhat, John was employed for several years as audio-video coordinator for Paul’s Enterprises Ltd., operators of Lucky Horseshoe, Lord Willoughby’s, and Bagatelle Great House. 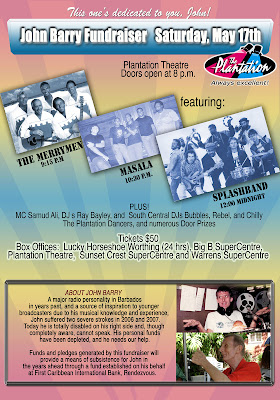 Then disaster befell John. In 2006, he suffered a severe hemorrhagic stroke from which he was fighting hard to recover before a second stroke in 2007 erased his progress and left him without use of the right side of his body. At present, he requires 24 hour nursing care, is confined to a wheelchair, and cannot speak, although he is completely aware and comprehends the world around him.
It is tragically ironic that someone who made a living with his voice has had that facet taken away, and difficult indeed for John in that he has no easy way to communicate. What’s more, John has no “safety net” to provide for his financial needs, and his personal funds have now been depleted, which is where the May 17th fundraiser comes in.
The intention is to set up an ongoing fund, which, through cash raised via the fundraiser event at the Plantation Theatre, and through pledged annual donations*, can help guarantee his ability to meet his basic needs.
The fundraiser will feature bands The Merrymen, Masala, and a reunion of Splashband, as well as the Plantation Dancers, MC Samud Ali, and South Central DJs Bubbles, Rebel, and Chilly. Tickets are $50, and are available at Lucky Horseshoe in Worthing (open 24 hours), Big B Super Centre, Super Centre Warrens and Sunset Crest, and at Plantation Theatre St. Lawrence.