The University of the West Indies – Cave Hill Campus

?From Beethoven to Buju?

The University Singers of UWI-Mona Campus in Concert

at the Errol Barrow Centre for Creative Imagination 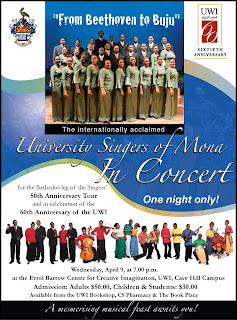 The University Singers is celebrating its 50th Anniversary under the theme ?One People, One Voice, One Song? as the flagship student society of the Mona Campus. This exciting and versatile group has managed to maintain a reputation for delivering performances of the highest caliber. Among its many achievements are national awards, including the prestigious Prime Minister’s Award for Excellence in 2003, the Vice Chancellor’s Award for sterling contribution to the University and a National Gold Musgrave Medal from the country’s premiere institution of culture, the Institute of Jamaica. Their mission is to share the joy of making music together for the entertainment of its audience, while at all times retaining a high level of musical expression and remaining true to its objectives of being a standard bearer of Caribbean music and an ambassador for the University of the West Indies.

A mesmerizing musical feast awaits you, as these talented performers promise an evening of entertainment that the entire family can enjoy!!!