Father of Comedian who created Skitsomania passes on – John Mearns Smith was 92, RIP

One of the earliest items in this News Blog was reminiscing over the fantastic slapstick and subtlety and sometimes both at once that made Skitsomania what it is. It is because of praising Skitsomania,that this is where the infamous phrase “SHAMELESS PLUG” was developed, you see, this is a free site and ads are limited, since we’re not really charging we slip it in for free now and again – thus “Shameless …“

Well, yesterday is a day that Skitsomania-founder Brian Smith will not be resting to one side in any great hurry, that’s because his father is no longer with us –

Jock was born December 30, 1915, Dundee Scotland. After emigrating to Canada at age 13, he enjoyed life for many years with his loving wife Mabel in Mount Dennis, Hamilton and Scarborough, before retiring to Wasaga Beach. 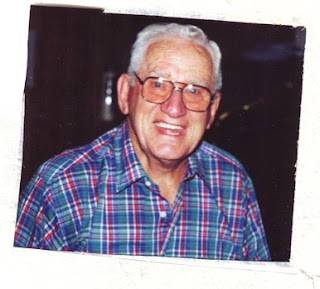 A Royal Canadian Legion and Knights of Columbus member and long-standing volunteer within many Catholic Church congregations, John’s favourite activities included golf, bowling, tennis and shuffleboard which were usually followed by cribbage and refreshments.

In addition to his brother Jim Smith of Brampton, he is survived by five children, Michael (Hamilton), Patsy Smith (London), Greg (Spencerville), Larry (London), Brian (Toronto) and their families. John was pre-deceased by his wife Mabel (Mackie) and daughter Maureen Ticknor.

Remembrances to the Canadian Cancer Society may be made through the Lynn-Stone Funeral Home, 15 Yonge St. S., Elmvale, Ontario

The Bajan Reporter respectfully doffs their tam in memory of one of the main influences for a great comedian and his many skits.