Earthrace will attempt to set a new world record for a powerboat to circle the globe, running 100% sustainable biodiesel fuel, and a net zero carbon footprint. The crew hopes to complete the voyage in under 65 days. The current record for a powerboat to circumnavigate the globe is currently 74 days, 23 hours and 53 minutes. This record was set in 1998 by UK boat ?Cable & Wireless Adventurer? in 1998.

The Earthrace team had delayed their start from end March because of La Nina weather patents, and a second start date was put back to the current date because of EU Customs delays which had prevented the Portuguese supplied bio-fuel reaching all the refuelling locations around the world. The last of those shipments will reach the Marshall Islands in the Pacific by the end of April meaning it will be there in good time for the arrival of the boat. 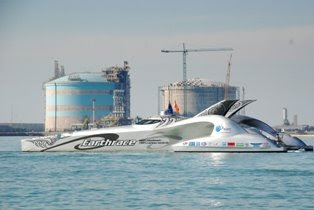 Sea trials have continued again this week. During a 12 hour sea trial in the Mediterranean this week, a problem was found with one of the steering pumps and this is now being overcome. A range of propellers are also being trialled as the first set has not delivered the anticipated speed.

Skipper Pete Bethune said: ?This time it?s really happening and we?re all raring to go. Our new team is working really well together and we have all the skills we need on board and on the ground crew to break the record.

?We owe so much to all our sponsors and the thousands of supporters of Earthrace around the world and we?re determined to succeed for all of them. Breaking the record will help to further increase awareness and debate about biofuels and other renewable energy solutions and that, in the end, has always been my goal.?