CHRIS GAYLE CRITICIZED FOR LIKING BEING RICH: WORKING FOR LIVING A CRIME? PLUS BEING PAID WELL??

According to Jamaicans.com, it seems one of their native sons is in hot water for being financially honest, to a fault it would appear –

Chris Gayle, Jamaica?s cricket captain, has made unacceptable statements in recent days, which have been criticized. 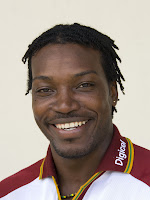 After losing the Stanford 20/20 final, Gayle said that Jamaicans were all winners ?because we are going home with US$500,000.?

When this comment was questioned by journalists upon his arrival back home, he said ?A lot of people can talk and say what they want ? we have J$5 million in our pocket right now.?

How many times have we heard a boxing match where the purse for the loser was $2,000,000.00 US or MORE? Then we imagine nursing a broken jaw just to endure one round with some pugilistic psycho to earn that kind of money.

Yet here is a man who more or less did that and said, I lost but I still get out licking and yet folk wanna crucify him, choopse! This reminds me how in the Russian version of Who Wants To Be A Millionaire, I think it’s called Oh, You Lucky Man – the audience heckles the winner and ask the audience is the last lifeline to use as the crowd may deliberately give you the wrong answer… H’mmm – they’d be at home in Jamaica, eh?

More honest, like how French law assumes you’re guilty until proven innocent, which is usually how the court of public opinion goes.

But for my vote, I say Chris, so what? Hell, if I could grab a batch of cash tomorrow that I never have to work again? Then I’d be like Sting’s song – Consider Me Gone!