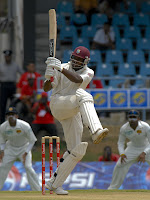 Despite Chris Gayle having a poor record against Sri Lanka, debutant West Indies opener Sewnarine Chattergoon said his captain gave him confidence to play his first innings in Test cricket.

“I was looking for the single to get down to the non-striker’s end and he (Gayle) helped me a lot because he was playing positively and the Sri Lankan bowlers put more emphasis on him than me,” Chattergoon said of Gayle who, in eleven innings against the Sri Lankans has only scored one half century and has made five ducks, while falling to swing bowler Chaminda Vaas on seven occasions.

Gayle, who demoted himself from his usual opening slot to number six in the First Digicel Test in Guyana, returned to open the innings with the 27 year old Chattergoon who celebrated his birthday on the first day of his debut Test. The West Indies captain was circumspect in defence against Vaas but was ultra aggressive against the other bowlers as he reached 45 (9×4) from 44 deliveries before getting out with the score on 62. 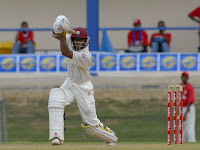 Chattergoon revealed that he needed to place greater emphasis on Sri Lanka’s champion duo of Vaas and world record holder Muttiah Muralitharan who picked up three West Indian wickets as they closed on 268 for 7.

The left hander from Guyana, who missed making his debut on his home ground two weeks ago owing to him contracting a flu-like illness two days before the First Digicel Test said that he never thought that he would play a Test match alongside his two countrymen ? Shivnarine Chanderpaul and Ramnaresh Sarwan ? who are also his two favourite batsmen.

He also said that he is thankful to them both for their support and advice over the years, especially Sarwan with whom he is close friends. 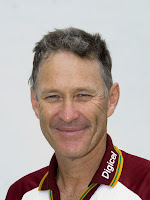 This as West Indies head coach John Dyson says it’ll take time to inculcate patience into the approach of West Indies cricketers at the Test level since that quality is missing from all levels of cricket in the Caribbean.

The head coach who is in his second series in charge said that he is pleased with the progress being made by Jerome Taylor who took four wickets in the Sri Lankan second innings of the Second Digicel Test match at the Queen’s Park Oval.

And Sri Lankan middle order batsman, Thilan Samaraweera who scored a century in the Sri Lankan second innings said that Taylor was the most difficult bowler to handle during the Digicel Test Series.

And Dyson hinted that it will take more time for the other bowlers to trust in the team plans and bowl with commitment to it. 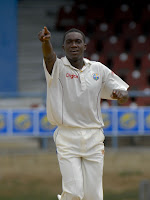 He says he would like to see greater consistency on the field to support the consistency he is seeing in the practice sessions.

Sri Lanka made 278 and 268 respectively while in their first innings West Indies made 294 and they now have the final two days of the game to achieve the score.