St Kitts’ AIDS Secretariat is stepping up efforts to empower women and promote behavioural change in the fight against HIV/AIDS.

Earlier this week, approximately forty persons from various agencies attended a workshop at the Ocean Terrace Inn designed to raise awareness about the female condom and increase its usage. 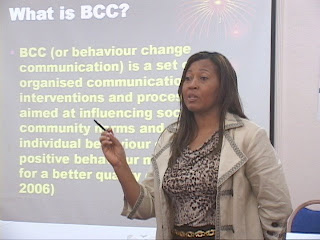 ?What we are doing is providing Caribbean countries with female condoms and with training so that they can use the female condom and also educate clients on its usage,? she said. ?Even though the female condom has been around in the Caribbean, it has not been used much ? so we want to make sure that persons adopt behaviours to use it ? realizing that it is a tool of empowerment. They can have a choice between male condoms and female condoms and they can feel comfortable that they are protecting themselves against sexually transmitted infections (STIs) and against unwanted pregnancies.?

National AIDS Programme Coordinator Gardenia Destang-Richardson said the local Ministry of Health was keen to partner with the UNFPA in this initiative.

?We embrace this opportunity because every effort that is presented to prevent and mitigate the impact of HIV/AIDS is very welcome in the Federation,? she stressed. ?The message is getting across in terms of awareness. We know that knowledge is extremely high in St. Kitts; however it is not necessarily translated to behaviour change. Hopefully, this workshop we are having will encourage persons to ? adopt positive behaviours that will help to reduce the cases we are seeing in HIV and AIDS.?

Mrs. Destang-Richardson reflected on the local HIV/AIDS situation and noted that persons must remain vigilant. ?We can?t say whether there is an increase in infections just yet, but what we know is that we are having more persons tested and from what we?ve seen we have not had many positive cases,? she explained. ?Maybe it is stabilizing, we don?t know yet but ? more persons need to come out and get tested to know their HIV status.?

The CARICOM Youth Ambassadors in St. Kitts and Nevis are reportedly working with the National AIDS Secretariat to promote behavioural change and encourage more young persons to get tested for HIV and AIDS. Details of a two-part project to accomplish this will be unveiled in the near future.

Meanwhile – Kittitian stakeholders are excited by the strategy of the Secretariat to promote usage of the FC2 female condom.

Vercelette Wilson explained that she enjoyed the session. ?It was very informative and now we know that women have a choice,? she stated, adding that the increased sturdiness of the condom is a source of comfort as it is not easily broken. 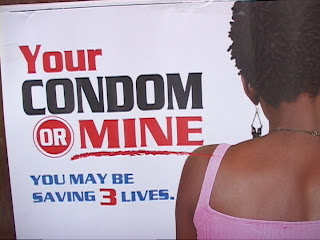 Police Inspector Vaughn Henderson said he learned a lot and believes that the female condom is an excellent tool in the fight against HIV/AIDS. ?It is now your condom or mine,? he stressed while giving advice to persons who are sexually active.

Bessie Ferdinand, a community nurse at the Newtown Health Center explained that she will share the knowledge she gained with colleagues and clients. ?Women use your female condom. There in an inner ring which gives the man more pleasure and there is an outer ring ? which can give pleasure to the woman,? she remarked.

Kathryn Garner of the International University of Nursing will be working with the Ministry of Health to measure the introduction of the female condom and evaluate the effectiveness of the promotional campaign as well as the usage of the FC2. 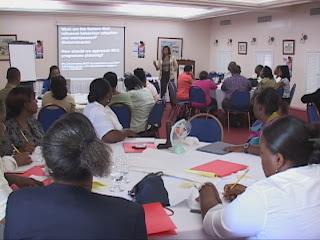 The workshop was organized by the Ministry of Health in collaboration with the United Nations Population Fund (UNFPA).