Juliana Inniss is an energetic pixie zipping from guest to guest at the City art emporium, making sure questions are answered or if folks are buying and so on. Her work looks like ancient vases and goblets for kings and gods of bygone eras – but have been cured in the fires of a Raku kiln as recently as this year or last year. 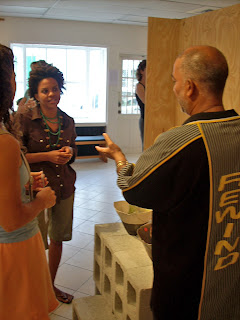 The method of firing in Raku is old, the temperature is barely a bump on the Sun itself at 950 degrees Celsius, but this is almost ten times the boiling point of water! It is still considered a low-firing way to cure clay – once heated, pieces are allowed to cool in containers with combustible material like paper, grass or sawdust. No result is ever the same, and for Juliana her favored material is sawdust for the glazing/bronzing left behind once the soot is scrubbed away. 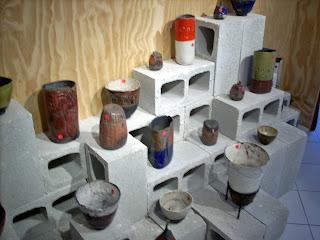 Her exhibition is concluding on May 9th and every day she’s making a sale, so you better check it fast before the show ends early!

The leaves and other formations seen in her works are not stylised or etched in, they are from the original material’s shape as it is pressed into the clay. She also told people recently at Zemicon how some Raku practitioners use dried seaweed for combustible reduction, but she prefers her sawdust which usually hails in great supply from Medford’s Mahogany Craft Village. 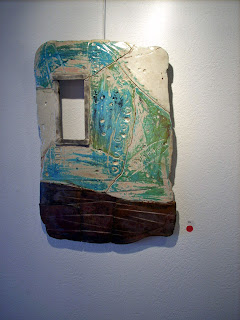 Most of her works while natural and quasi-antique, there are some which may seem surreal – these are what I call her “Windows” series if you go on her website, look for pieces like “Cool Breezes” or “Woman Tongue Window” and she admits she is making a simple message of taking time to appreciate your surroundings, as it’s disappearing too fast with concrete coastlines. 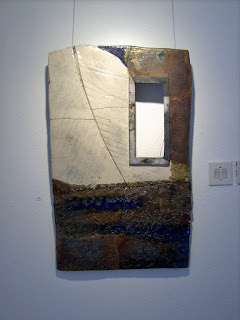 Juliana says her message is both environmental and ecological, and she says more people need to go on Nature hikes and see what she means. 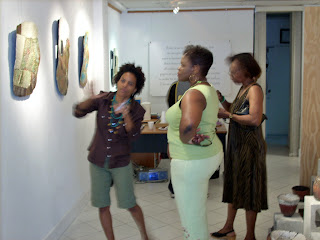 She told audience members that she is looking for some more large tins to act as her reduction chambers for her work – in the DVD, we saw she even went so far as to use “Royal Dansk: Butter Cookies” tins for when she finished baking her models! 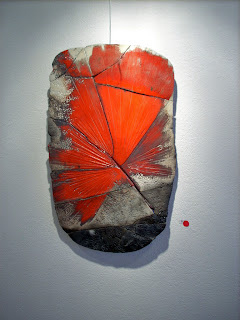 The artist explained the glazes she uses are non-toxic (For the latest show, she only used 5 types of glaze), and when they are finished curing, she washes them – using a gentle dish lotion and an old brush. Then she reassembles the pieces, sometimes using a wooden frame to the back of the item so as to have hanging screws for easier mounting on a wall. 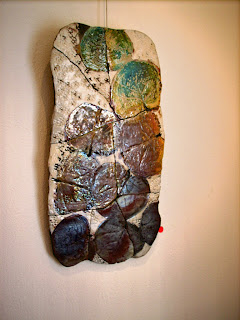 Although she has gas cannisters and heat and everything else – along with all the requisite safety gear, no extra insurance is needed. Once you get past initial costs, Raku pottery is an investment of itself.

Back to the same DVD demo, I noticed there was background music on it from Sly and Robbie Dunbar, so I asked what music does she personally hear while making the works? Juliana laughed and says she is too busy hearing the WHOOSH of the kiln to really have music in mind while she’s creating.

I referred to her days in Anguilla and asked how did it compare to Barbados, she said she only spent three months there and only sporadically. A piece here or there, and that’s because she says Anguilla is so QUIET. She recommends it for anyone who wants to somewhere for peace and quiet while they complete a project. They have little to do, and as such, a great tourism stop for making sales. The whole island has 14,000 people – if you want action, go to nearby St Maarten.

The ceramic artist explained the clay used was imported since Bajan clay is very red and iron-based then when fired would become darker, if she gets around to using clay from here she may mix in a fair bit of sand to even out the process, since Raku really needs a lighter base to emphasise the intricacies of her technique. 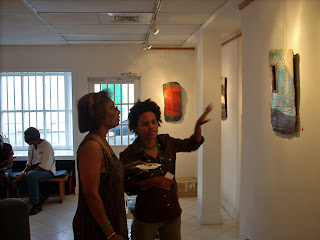 Proper curing takes at least 75 minutes before truly reaching the best temperature, she noted, and please – do NOT call her a potter she is a CERAMIC ARTIST! As she said, “Clay is my canvas; these are my ‘paintings‘!”