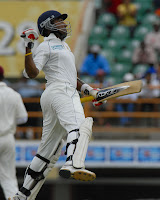 Sri Lankan captain Mahela Jayawardene said that his team is firmly in command of the First Digicel Test at the Guyana National Stadium, Providence after declaring on 476 for 8 on the second day and picking up the crucial wicket of captain Chris Gayle late in the day.

?We?ve got the advantage, we?ve done all the hard work now, it?s in our hands to make sure we keep putting pressure on the West Indies batters, they have to make sure that they bat for at least two days to get in a position where they think they can win this game, we?re in a very good position, probably in a position where we couldn?t lose this Test match, we just need to make sure we push for a result now,? a confident Jayawardene told journalists after the end of the second day?s play.

The Sri Lankan captain scored his 22nd Test century as he led his team to a score which he says is worth more on the slow Providence pitch. 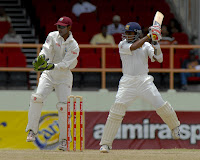 ?I reckon 460 is (worth) about 550 on this wicket so we got the runs on the board, got a very good wicket of Chris (Gayle) up front and if we can push for a few more wickets tomorrow we can really put them under pressure,? said Jayawardene who top scored with 136 from 234 deliveries to become the second Sri Lankan century maker in the innings after opener Malinda Warnapura’s 120 on the first day. 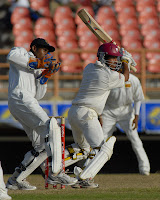 With one hour to bat after the Sri Lankans declared the West Indians reached 29 for the loss of Gayle who was trapped LBW to his arch nemesis Chaminda Vaas for the seventh time in his career. Ramnaresh Sarwan (21*) and Devon Smith (8*) ensured no further casualties for the home team but the Sri Lankan captain said their plan had worked perfectly.

?In that hour we were trying to get one wicket, that was it, anything else would have been a bonus and we got that wicket upfront which was a big one so I?m very happy with it, the declaration was to make sure we at least get one wicket which we got,? Jayawardene explained.

And while he refrained from saying that the Sri Lankan team had Gayle?s number, he did say they know where to bowl to the West Indies captain who has never scored a half century against Sri Lanka in any of his ten attempts.

?He is struggling against Vassy (Chaminda Vaas), not just Vassy but a lot of left armers have troubled him in the last few years, we know the area to bowl to him so we just make sure we hit that area and ask a question from him to see whether he?s got an answer or not,? Jayawardene said.

Against Sri Lanka, Gayle has made five ducks with a top score of 44 and has not reached double figures on seven occasions. 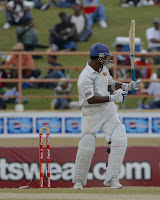 When questioned on whether it was risky for him to declare at 476 for 8 which some analysts felt was a bit too early, Jayawardene said the team was satisfied that they had made the right judgment call.

?We thought there is no point bowling 4 or 5 overs, a good 10 to 12 overs would be good enough for us so even if we have to bat a second time, we will still have enough time on the fifth day to push for a result, it?s a slow wicket, you can?t predict anything but it?s in our hands to work really hard and push for a victory,? Jayawardene said.

Asked what was the key to scoring runs on the pitch which proved to be batsman friendly but which is getting increasingly slower Jayawardene said patience need to be the watchword. 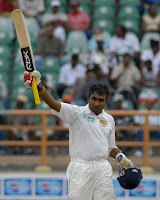 ?I think you need to be very patient, it?s difficult to play shots off, maybe with the harder ball it is a bit easier but once it gets old it?s tough so you have to be very patient and have a game plan,? Jayawardene reasoned.

He thinks that his spinners, especially world record holder, Muttiah Muralitharan will hold the key on the third day of the opening Digicel Test.

?We know once the ball gets older the spinners will get more effective, it was skidding through a bit (this afternoon) because the ball was hard,? Jayawardene explained. 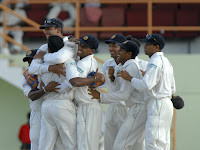 And he said he was delighted to finally get a Test hundred against the West Indies.

?It means a lot, I missed a hundred against West Indies in Colombo, 98 run out, so getting that was a big one, especially away from home,? Jayawardene revealed.

{Ed’s Note: All cool & snazzy pix thanks to Brooks LaTouche in partnership with Digicel}