T’dad set for some hot wickets in their tail – As Windies take on Colombo, Trinis test their amateur skills at Digicel Scotiabank’s Cricket Experience

After virtually securing all the records at the Guyana National Stadium during the First Digicel Test match when the stadium became the 97th Test venue in the world, Sri Lanka now moves to take on West Indies in the Second and Final Digicel Test at the Queen?s Park Oval in neighbouring Trinidad and Tobago. 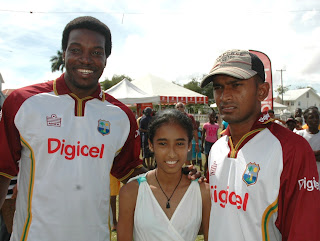 The two teams have never played a Test match against each other in Trinidad so numerous records are up for grabs. The five Test matches Sri Lanka played in the Caribbean were in Guyana, Antigua, St Vincent, St Lucia and Jamaica. 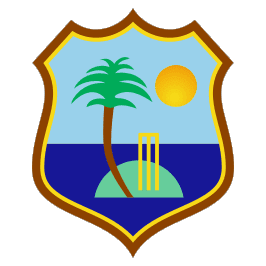 Their victory in the First Digicel Test at the Guyana National Stadium was their first Test win in this part of the world. Malinda

Warnapura and captain Mahela Jayawardene who both scored centuries in Guyana were the second and third Sri Lankan batsmen to score triple figures in the West Indies following Marvan Atapattu’s 118 in St Lucia in 2003. And Warnapura is the second Sri Lankan batsman, again following Atapattu, to score a century and a half century in the same Test.

The left handed Warnapura, playing in his third Test match and who totalled 182 runs (120 + 62) after the First Digicel Test could overhaul Sanath Jayasuriya‘s record of the Sri Lankan with the most Test runs in the Caribbean. The recently retired left hander never scored a century in the West Indies but amassed 311 runs at an average of 44.4 with a highest score of 90. So Warnapura will need a match tally of 130 runs to surpass Jayasuriya?s mark.

Muralitharan, the off spinning genius, has taken a total of 31 Test wickets in the West Indies from nine innings and only once did he fail to bag more than three wickets in an innings.

He now confronts the Queen?s Park Oval pitch which has been known to offer generous assistance to spinners as the West Indians aim to draw the Digicel Test Series before going on to the three match Digicel One Day International Series.

Indian master batsman Sunil Gavaskar‘s 220 is the highest score at the QPO while former West Indian spinner Jack Noriega‘s 9 for 95 is the best bowling figures in a QPO Test. While some of the batsmen on both sides might be eyeing Gavaskar?s record, it would take a monumental and earth shattering effort to top Noriega?s figures.

Remarkably both records were established a month apart in the same Test series in 1971 so they have been standing for 37 years.

English pacer Angus Fraser?s 8 for 53 is the best bowling figures in an innings by a visiting bowler while the West Indian batsman with the highest QPO Test score is Sir Everton Weekes? 207 (he also made 206 in another innings on the ground). 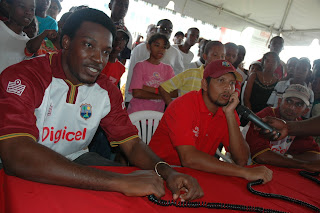 The Second Digicel Test commences on April 3rd – meanwhile; Digicel and Scotiabank have teamed up to bring the Digicel Scotiabank Cricket Experience to Trinidad this weekend to bring fun and excitement to cricket fans in advance of the Trinidad leg of the Digicel Home Series.

The Digicel Scotiabank Cricket Experience offers cricket fans of all ages the opportunity to test their cricket skills and knowledge through exciting games that range from simple ball throwing, to batting, catching, bowling and quizzes.

Starting today at Saith Park, Chaguanas, before moving to King George V Park, Port of Spain, from Monday, 29 March, to Wednesday, 2 April, entry is free and anyone can take part to be in with a chance to win exciting prizes from Digicel and even meet some of their favourite West Indies cricketers.