West Indies vice captain Ramnaresh Sarwan who top scored with 80 in his team?s 269 for 9 against Sri Lanka in the First Digicel Test said he was happy to be back in international cricket after being out for seven months. 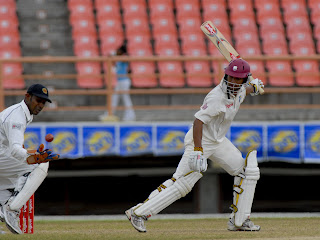 The right hander said though that , who scored 476 for 8 declared in their first innings were playing in very familiar conditions despite being the visiting team.

?The surface here (at Providence) is very similar to the ones they play on in Sri Lanka, when I toured Sri Lanka a few years ago it was the same sort of surface, Mahela (Jayawardene, the Sri Lankan captain) seems to know the conditions pretty well with the sort of field placements that he has been putting forward to us,? Sarwan told journalists shortly after the end of the third day?s play.

Asked whether the Caribbean groundsmen need to rethink their apparent inclination of preparing pitches which suit the visiting team (given pitches in 2004 and 2006 in Jamaica which England and India respectively won Test matches on along with the current one at Providence) more than the home team Sarwan was cautious but hinted that the Providence pitch could have been prepared with more pace and bounce. 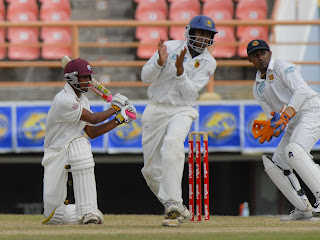 ?You have to take into consideration the opposition you are playing against whether you want a track that is faster and bouncier, so probably we want the opportunity to play on something that has more pace and bounce but that didn?t happen so we have to try and continue working hard as a team and try to work through that,? a diplomatic Sarwan said. 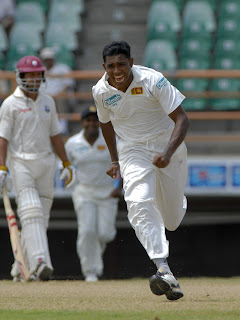 He said that the Sri Lankan plan of bowling on one side of the wicket along with the experience of their top bowlers were added bonuses for them.

?Obviously they have the experience of Chaminda Vaas who has been doing this year in year out for them, especially on the flat surfaces they play on in so basically it wasn?t a surprise to me because they know the conditions here pretty well,? the 27 year old Guyanese said.

And he commented that world record holder for the most Test wickets, Muttiah Muralitharan was also a major threat.

?He?s always been difficult (to play), I feel like if I was never ?in? when batting him, I tried to concentrate as hard as I can and look at the balls closely and play as straight as I can and play with the spin if I see it,? Sarwan explained of his plan during his innings which lasted for four and a quarter hours and during which he faced 199 deliveries. 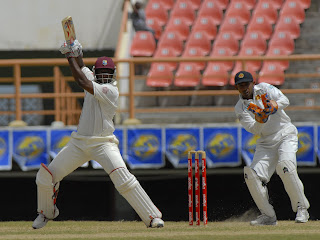 Both Vaas and Muralitharan picked up three wickets each in the innings. Vaas got the wickets of Sarwan and captain Chris Gayle while Muralitharan accounted for key batsman Shivnarine Chanderpaul, Dwayne Bravo and Ryan Hinds. 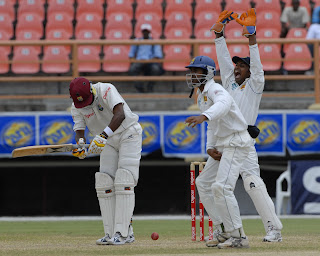 Asked whether the West Indian batsman were too reckless with their shot selection Sarwan said that may have been the case to some extent but that the Sri Lankans must also be credited for executing their bowling plan.

?You have to give credit to , their bowlers were pretty patient and the fact that they were bowling on one side of the wicket, they were having an attacking and a defensive field so it was pretty hard to get runs and also the discipline they showed,? Sarwan reasoned.

Sarwan agreed that the Sri Lankans are in command of the Digicel Test match but that there was still a chance for the Windies to launch a rearguard attack.

?First of all we have to save the follow on, then analyse it and put ourselves in a decent or good position, there is still a lot of time left in the game, we have to make sure we play well as a team and continue to have a lot of partnerships going whether we?re bowling or batting,? Sarwan reasoned.

He also revealed that his left little finger injury which is not major had pained him throughout the innings but he tried not to give any indication of this to the opposition and that physiotherapist CJ Clarke?s treatments have been working well.

** All photos are compliments of DigicelCricket.com/Brooks La Touche Photography **