Some of reggae and pop music’s biggest names have saluted British supergroup The Police on the album, Spirits In The Material World: A Reggae Tribute to The Police. 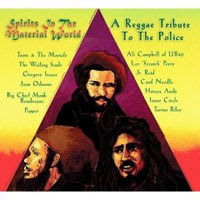 The album was released in the United States on Tuesday 19th February, by New York’s Shanachie Records.

Most of the 12-track disc was produced by reggae band Inner Circle at its Circle House studio in Miami. The ‘Spirits‘ crew includes old school reggae acts like the Wailing Souls and Gregory Isaacs, as well as new wave roots performer Tarrus Riley.

It is the second reggae tribute to the three-piece band which was arguably the biggest international act of the early 1980s. Grass told The Gleaner that the Shanachie set is different from the two-volume Reggatta Mondatta: A Reggae Tribute to the Police, released a decade ago by Ark 21 Records.

“Those had licensed tracks, these songs were all done from the ground up,” Grass said.

Junior Reid, who is also enjoying a career renaissance, covers Synchronicity while the ‘Souls’ contribute One World. Isaacs puts his spin on So Lonely while Tarrus Riley did a version of King of Pain, taken from the group’s massive 1983 Synchronicity album.

Inner Circle recorded The Bed’s Too Big Without You.

Grass said he came up with the idea for a Police tribute shortly after Sting, Stewart Copeland and Andy Summers reunited for the 2007 Grammy Awards.

“They always had a reggae element to their songs,” he said.

Founded in 1976, Shanachie Records has a vast catalogue of folk and Gaelic music. Their roster also includes some of the most influential reggae albums of the 1970s, including Two Sevens Clash by Culture and Visions by Dennis Brown.