It was not so long ago when we told you we’d check a few polo matches for ourselves and see what the difference is – we have and there are VAST chasms, lemme tell ya! 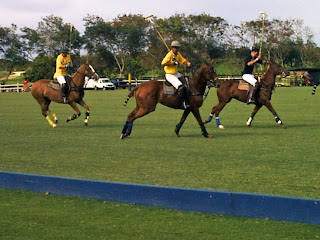 I realise both Waterhall and Diamonds International have been advertising polo on the radio, after my infamous article appeared, but Waterhall has just revised its website a lot, with much of it still incomplete – while Lion Castle and the Barbados Polo Club‘s sites just occupy cyberspace… They need wallpapers, screensavers and maybe free song downloads, folks, if you really wanna survive competition! Look at Waterhall, they have actually used tv ads and gone youtube!

Looking at the ad, it definitely has its humour niche – however, since when has polo been a working-class sport? Even if you check the classic movie, Pretty Woman, set in the good ol’ US of A, it is an elite event. However, Waterhall is trying to get everyone to attend, it seems they’re in a cold war with the B’dos Polo Club, they want their own agenda and don’t care if theirs conflicts with any other chukka. 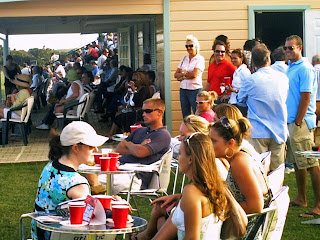 Anyhow, first checked a match at Waterhall last week, found the people to be rather remote unless you’re known from other circumstances. There was a chance to win tkts for 4 with Virgin Atlantic and accommodations to London, so I thought why not? They had some pretty Virgin stewardess serving scones to the clubhouse folk, but it seemed vaguely redolent of the plantocracy era… 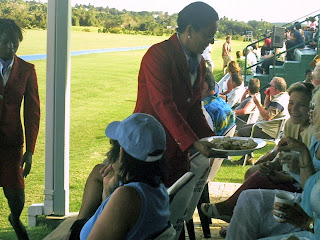 Their website belies what you find there, Waterhall is running a photo slide-show implying hundreds of Black Barbadians flock to polo, what a lark! At least not for the day I was there… 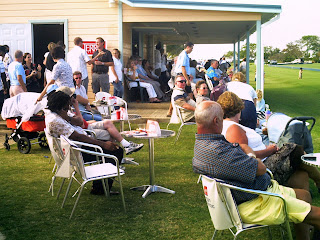 The clubhouse was full of very aloof Europeans while the stand had a mix of black and white Bajans who seemed more relaxed. Teddy Williams conducted the commentary during the first game and sounded a bit like Andre “Rebel” Elias of Mix FM. He is adequate but not necessarily a Howard Cossell or a Sam “Shell” Harris, however, Oliver should take some lessons from [family-member] Ted or from Jonathan Simpson – every time a mallet struck the ball it became a lovely shot, every bloody strike was a lovely shot, ’til I wanted to run up the stand and scream at Ollie, “SAY ANY OTHER PHRASE THAN LOVELY SHOT, JESUS“! 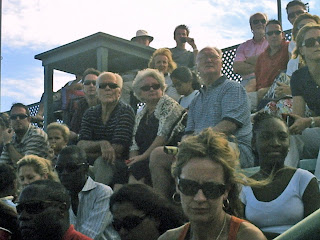 My word, how about – “Ooh, he sent that one whistling across the opposing team captain’s steed…” or “Hey, call NASA for that strike there – he just sent the ball geo-orbital!” It’s known as word colouring, more on the difference later on…

I saw that between the clubhouse and the stand there was a little boutique with these cute teddy bears and so I decided to buy one for the wife as she has a massive stuffed toy collection.

Me: That’s really adorable! How much?

Me: (It’s as if you shoved a nuclear warhead up my arse and said the timer has 4 seconds) FIFTY DOLLARS? [screaming at top of lungs in total awe as everyone stares at the poor town bumpkin]

Chukka Chic: Oh, but it’s Barbados dollars! [as if to say – not US currency, you money retarded twit]

Me: (looking for eyeballs which popped out in shock and when dusting them off and reinserting them) You mean one-five or five-zero? [I dunno, maybe as I’m over a certain age now I may have misunderstood, I hoped]

Chukka Chic: Five, Zero… [As in – look, if you want to be a part of our clique, than you better have the budget, bub]

Me: (whipped now, and knowing better than to argue with three snotty brats who probably have retainers made of titanium) Um, okay, sigh, thanks…

So stunned I walked into the bar to get something to settle my nerves – why did I do that? A Red Bull? TEN DOLLARS! By God, if I drink one of those, then I want to sail past F-16’s like Iron Man!

Only Cockspur rum, no Mount Gay, and the cheapest drink is a Rum Punch at five dollars – I nearly left right then and there… But I said no, I was gonna cover this and let folks know – and that is what I will do! I stepped outside again and I saw there was a nursery for toddlers – while I know parents want time for themselves it just seemed that those assigned to mind the babes were there for money’s sake and were not really putting their heart into it. 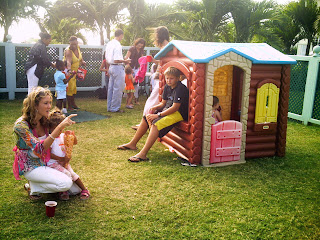 Let me demystify some of polo for you at this point, it is great to watch the horses thundering up and down the field like if Lucifer himself in all of his fiendish ferocity was nipping at their fetlocks! This is a sport that can be witnessed by anyone, but few can really play it… 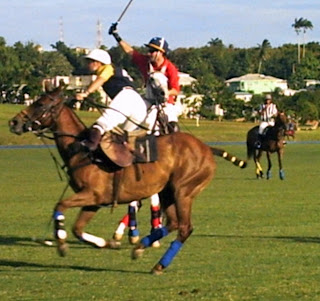 In this sense, yes, polo lessons are given at Waterhall for anyone – but to rent polo ponies is a tremendous outlay of cash, a more serious investor would have their own stock handy; yet how many folks can really set aside loot like this for a match like that? Conversely, there are equestrian events, horseracing AND polo – so how many horses are they in Bim and where are they kept? 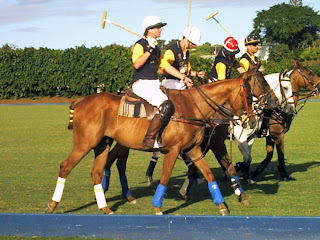 Back to polo – you hear of chukkas, right? These are actually four quarters with a duration of seven and a half minutes each (7:30 mins), so if there are few penalties and fouls, then a fairly brisk game of polo could run for only 45 minutes and allows you to grab a bite or a drink if you have the cash at Waterhall, eh? 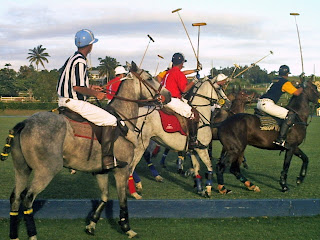 I saw an executive friend of mine at Waterhall, then when we were ran into each other outside the match I relayed my teddy-bear revelation. He said, “I don’t know why you went and do that sh**e, I eat before I go to Waterhall – watch the horses and leave without buying a drink!“

This is a man with money too, y’hear? So this new data knocked me for a feather, my man! Well, the match was home team in both cases – 5 to 2.5 in the warm-up and 7 to 5 in the feature event. I grabbed a few magazines that were left for free by Select magazine, and eventually around 6:30 that night I toddled off… Last Waterhall observation, during half-time (if you call it that, between one match and the next) they played a lot of white alternative rock (don’t mind a bit myself, but not for half an hour) and the only Bajan song I heard was Philip 7’s Beautiful Surprise when I was heading for my car and then there was Fantasia after that… Two hours later when most of the foreign white folk sauntered off into their villas. 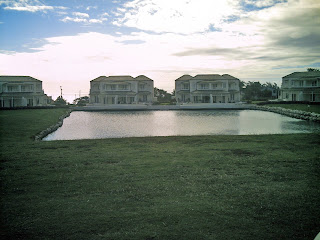 Each villas’ living space is about half the size of my property’s total land – yet they shell out close to two million Barbados just to have the privilege of having polo on their front lawn! 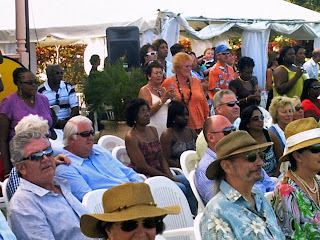 Now for the Lion Castle Estate (where a plot of land, no property, STARTS at US $215K!), I think their main issues would be to update their website, have a cool jingle for their radio adverts and offer a basic yet snazzy/classy item as a giveaway to compete with Waterhall’s travel giveaway. 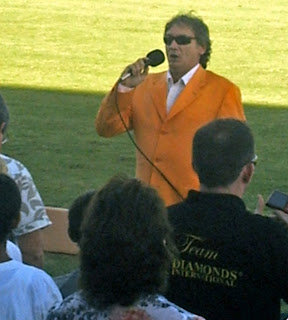 The place is HUGE, there was a large mix of all kinds of Bajans – there was even a guest arrival via helicopter of noted singer/barkeep-transplant Alex Santoriello (who’s annoyed I am yet to review his place) – he was flown in to render both UK and Bajan anthems for the match B’dos VS Cheshire, this was apart from an appearance of Prime Minister David Thompson and also Kyffin Simpson of SOL/Simpson Motors. 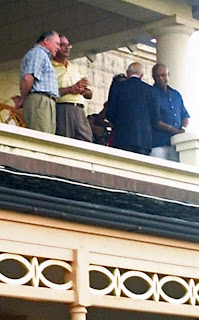 Other folks who went to Lion Castle were David Ellis from Starcom, Charles Leacock – Director of Public Prosecutions, Philip Archer from Mojo’s (one of Phil’s brothers flew the helicopter while the other played for Barbados against Cheshire), and the place was rammed from the outset! 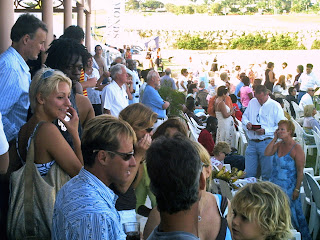 They did not kill you at the bar, the Rum Punch cost more and Red Bulls were 7 which is pretty much what you find them at any shop. The Bar’s Manager was a white lady who also served drinks and did not wait on staff to do it all! Booze was via tickets but you could buy food from the caterers with cash, turned out it was my neighbours from across the street – the Corbins! 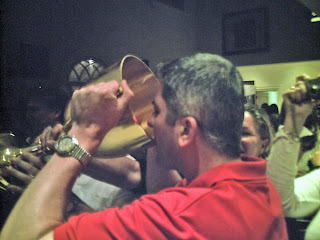 The commentary from Jonathan Simpson was affable, competent and occasionally insouciant – like when he made a jocular remark that if I wanted to play polo that a larger steed would be necessary. 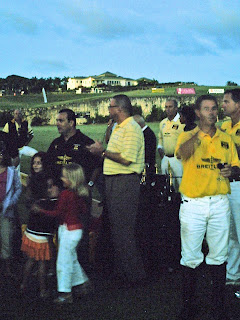 The match was fun and Mr Thompson presented the prizes, I don’t recall any other PM who did that with a polo match. Again, Bajans rocked – 6 to 3 in the opener and 8 to 4 in the featured match of Barbados Vs Cheshire.

Later, I asked one of the team from DI why they used that cheesy GIS-like music for their radio ads and they said it was the only way to avoid paying royalties. So I asked why not commission your own music so as to have it on call at all times? I suggested Arturo Tappin or Nicholas Branker, but DI may have Eddie Grant in mind – now that I think about it, Leonard Griffith may be best of all! DI says that both Waterhall realise that polo’s continued survival means drawing a broad-based fan support and thus the increased advertising. 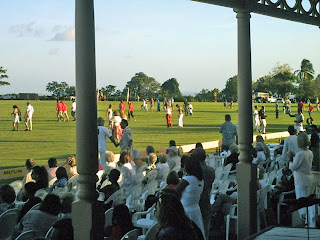 Jonathan Simpson actually invited the crowd to stomp back in the divots but watch out for the brown ones just like in the Richard Gere/Julia Roberts classic!

I saw Jacob Hassid (His first name is said almost like YAH-KUV), who’s in charge of the Barbados branch of Diamonds International, they had displays with jewellery and Breitling watches on sale – the least expensive was like 750 US back in 1996! For a Quartz movement and a mineral crystal face! I believe it was a Colt. 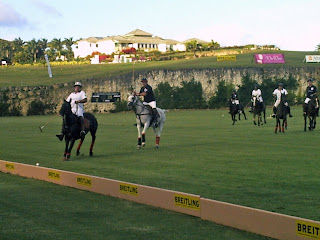 Each winning player got a Breitling watch worth ten-thousand US, duty free! Oy! I suggested to Mr Hassid since Waterhall is giving away flights, why not have a raffle for a low-end Breitling? Like the same Colt with quartz and mineral face, he says that is not so bad an idea and he will run it by his staff… 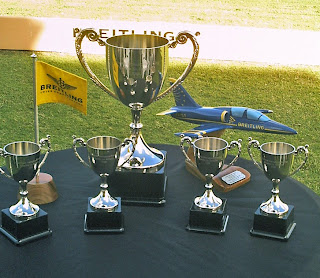 There was even a lady in the Cheshire team, Lucy Taylor, but the fun was from when they drank from the trophy and started dancing on the bar itself! 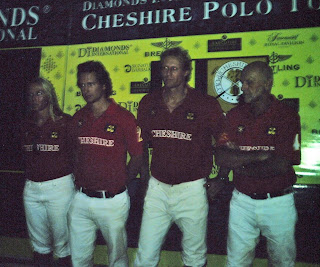 They had an amazing deejay who played 80’s tunes and not just Euro-Rock but Calypsoes from Barbados and throughout the Caribbean – if you need a great deejay for a wedding or birthday, then his name is Steven Rapley at 262-6223! 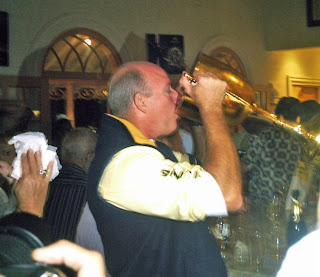 By nine o’clock that crowd was utterly insane and I wandered in the dark finding my car on the third try – um, klieg lights? Please? Still, had a blast, and it was not a stuck up nightmare in the least – sport of the finest kind, between those two games I saw it was chalk and cheese as Bajans like to say… 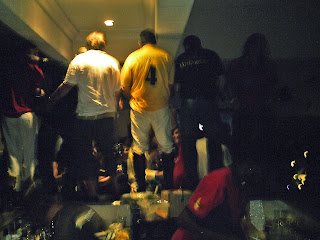 But there’s still Clifton and Holder’s Battle of the sexes, so stand by for more coverage and analysis!