A number of high-tech machines were recently added to the Alexandra Hospital?s inventory of modern medical equipment. 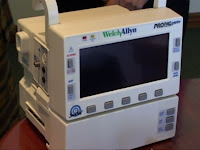 ?I would like to say a hearty thank you to Ms. Claxton and the Auxiliary and we hope that our partnership with them can continue,? he said.

He took the time to advance the hospital?s cause when he appealed to business members in the private sector and other social organisations to think of ways in which they could help the hospital and to recognise that it was their collective responsibility, to improve on all aspects of medical services that the hospital provided to the community.

The Medical Chief of Staff also revealed that the maintenance of such high-tech machines would require a locally trained Bio-Medical Technician, in order to eliminate the high cost of paying foreign trained technicians.

He took the opportunity to implore students and other perso ns in the community who were interested in training in the Bio- Medical field to get in contact with him or the Ministry of Health.

The Medical Chief of Staff enlightened the community about the overall purpose of the Vital Signs Monitors which would be used for patients most critically ill and need to be closely monitored for their heart rate and its regularity.

In addition, they would also be used for invasive high blood pressure monitoring and to monitor the amount of oxygen in a patient?s blood.

Dr. Rawlins concluded that it was very good to have received the advanced pieces of equipment and marveled at the added technology the hospital received, which he said would enhance the facility?s performance.

He assured the auxiliary members, which comprised of Ms. Claristine Claxton, President and Ms. Elaine Titley Vice President, that the monitors would be utilised efficiently by his medical team and thanked them for their charitable donation.