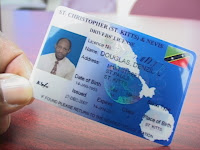 The senior government officials were presented the licenses at a brief ceremony at the Inland Revenue Department over the weekend. Systems Analyst Alston Johnson explained this new card will significantly expedite the issuing of drivers license and boasts a number of security features.?One of the major selling points is that you get your license basically in five minutes,? he said, noting that this is the estimated time that will be spent filling out the relevant paperwork, having a digital photo taken and having the card processed.

The new card has many security features that were designed by the Traffic Department of the Royal St. Christopher and Nevis Police Force in collaboration with the Inland Revenue Department. These features will allow the license to be readily accepted as a form of identification by various international agencies. 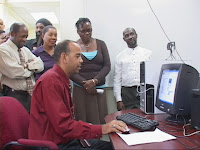 Prime Minister Douglas noted that this new development is in keeping with the continued advancement of the Federation.?I want to emphasize that more and more ? our people will become reliant upon improved technology as it impacts (doing) business in the world,? said Prime Minister Douglas noting, that his Government has a broad strategy in place to facilitate the expansion of Information and Communication Technology (ICT) services in St. Kitts and Nevis. He added that the new National ICT Center and other tools are being employed to ensure the populace has the necessary knowledge to function in this new environment. 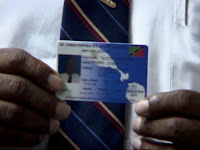 The general public will be informed further about how they can obtain the new cards this week. This as Nevis’ Leader, Joseph Parry, encouraged Nevisians to switch to the new enhanced license. He made the call moments after he was issued with the first card on the island at the Department?s Charlestown office.

?I would like to encourage all Nevisians to get the new card. It is my understanding that it is time saving, it is only a matter of minutes and you get your card the same time rather than the next day. I also understand that it has some enhanced security features which would be of benefit to all the citizens who use it.?So I have started it and I am encouraging everybody else to follow, to come in and have the changes made. It is only a matter of time and in five minutes it can be done. So please come and make the change as we seek to reach international standards in all that we do in the country,? he said. 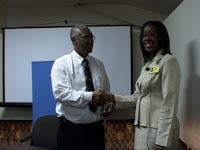 Ms. Manners told the Department of Information, that the new card had several benefits and most of all it conformed to international standards and processing time was significantly reduced.

?I am pleased to announce that this new card would be processed the very same day in just a matter of minutes.

Also there are several security features that can be used as a means of validation both locally and internationally,? she said.