With stops in Germany, Italy and France, Lutan now blazes through Spain, Portugal and Scandinavia, getting a great response on his six-week Europe tour. Lutan Fyah just performed to a packed crowd of over 1,000 patrons in Laval, France then followed that with a heavy gig in Barcelona, Spain with Jah Mason to over 1,500 reggae fans. 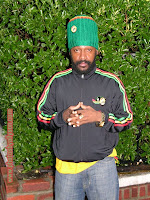 Lutan also went to Bilboa, Spain and Madrid, Spain, while Porto, Portugal was yesterday and Lisbon, Portugal is tomorrow. After the show in Lisbon, Lutan will then move on to Scandinavia where he has two dates in Sweden and one each in Denmark, Finland and Norway.

Lutan Fyah has been very pleased with the response he has been getting from his fans in Europe; this response has caused tour organisers to extend the tour until April 5th.

“There has been a great response from the fans,” the popular Recording Artiste commented, “I am almost overwhelmed by the level of acceptance there is for my music in Europe. I hope to make this European tour an annual event as there are many places that I will not be able to go this year.”

Upon returning to Jamaica in April, Lutan Fyah will begin preparations for his tour of Africa and will release his long anticipated album ‘Old Capitol‘.