Sri Lanka captain Mahela Jayawardene said he was looking forward to an exciting series in the West Indies where Sri Lanka are yet to win a Test match. Digicel, the official sponsors of the 2008 Home Series, along with President of the Guyana Cricket Board and West Indies Cricket Board director Chetram Singh were on hand to welcome the visiting team to the Caribbean. Digicel Group Sponsorship Manager Ciara Ryan told Jayawardene that the sponsor and all the Caribbean are looking forward to an intense and exciting series.

He was speaking shortly after his team?s arrival at the Cheddi Jagan International Airport in Guyana after a 50 hour journey from their home in Asia.

Jayawardene who appreciated the warm and hospitable welcome and said his team is looking forward to their first Test series win in the Caribbean.

The Digicel Home Series 2008 will more than likely be the farewell tour to the Caribbean for senior bowlers Muttiah Muralitharan, the world record holder for most Test wickets and Chaminda Vaas, the devastating left arm swing bowler. Jayawardene said they have been fine ambassadors for Sri Lanka?s cricket and are a wealth of cricketing knowledge which he hopes the younger players can tap into.

In the batting department he said that much of the burden will rest on his own shoulders along with the dynamic Kumar Sangakkara who has been enjoying an extended purple patch recently.

The second and final Digicel Test will be played at the Queen?s Park Oval in Trinidad commencing April 3rd.

Sri Lanka has previously played two Test series in the Caribbean in 1997 and 2003. Both were two match Test series which they lost 1-0 on both occasions. They are yet to win a Test match in the West Indies. This will be the first time they will be playing Test cricket in Guyana and Trinidad at Tobago. 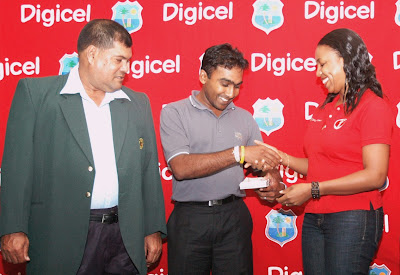 The West Indies team arrives in Guyana on March 18th. Meanwhile – President of the Guyana Cricket Board Chetram Singh is assuring the public that preparations for the first Digicel Test match are going as planned. Singh gave this assurance despite the GCB being forced to switch venues for Sri Lanka?s warm up match starting today, Monday 17th.

The three day match against the Guyana President Select XI was originally slated for the world famous Bourda ground, the traditional international venue in Guyana, but after several days of unseasonal heavy rainfall the ground was completely water logged and preparations were stalled. The match has now been shifted to the Guyana National Stadium at Providence which is where the first Digicel Test will commence on March 22nd.

Singh said preparations to the Test pitch have also been upped and the groundsmen will continue to work on it early in the mornings and late on the evenings.

He said that as a result of the constant rainfall in the early part of last week ticket sales for the first Digicel Test were slow but picked up later in the week.

It is the first time the Guyana National Stadium will host a Test match after being initially used for six Cricket World Cup matches in 2007 and Singh said the facility is much better for the organizers.

The 15,000 seater Guyana National Stadium is the third international venue in the South American country, following Bourda and Albion which hosted five One Day Internationals between 1977 and 1985.