By the time Mavado, Bounty Killa and Ninja Man exited the stage at about 6 am, Magnum Follow Di Arrow 2008 had already gone down in dancehall history as one of the best shows ever to grace the shores of Jamaica’s north coast. 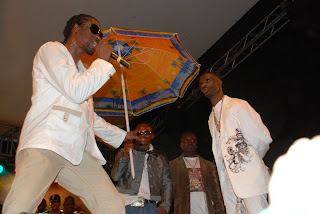 Magnum Follow Di Arrow 2008, hailed as the best dancehall show since the start of the year, presented itself as a good example of how entertainers and patrons can have a good time. The event was well attended and even attracted a large throng of tourists from Asia, Europe and America. The Bashment Squad was the first sound to take the stage as patrons were streaming in droves allaying fears by some that the early morning showers might put a damper on the event. Magnum Follow Di Arrow on Saturday March 1, 2008, went off without a hitch and patrons indeed received their monies worth.

Magnum Tonic wine has for the last nine years sought to bring quality dancehall entertainment of the highest standard to Jamaica. Magnum Follow Di Arrow, based on the crowd response and the standard of performances, is fast becoming one of the flagship events sponsored by the brand. Magnum Tonic Wine ensured that all the checks and balances were in place; the stage production, site management and overall ambience of the event were of a superb quality. 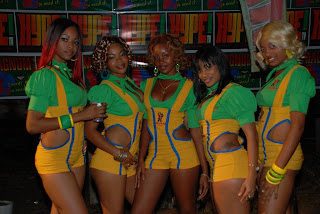 “Every bottle of Magnum Tonic Wine is produced to the highest standard, based on this fact it is natural that whatever we are involved in manifests that same characteristic,” says Gary Dixon Brand Manager Magnum Tonic Wine, “We see the successful staging of ‘Magnum Follow Di Arrow‘ as further reinforcement of the commitment Magnum has to the development of Jamaican culture. We are happy that so many patrons and members of the industry came out to support the event and guarantee that next year will be bigger and better.“ 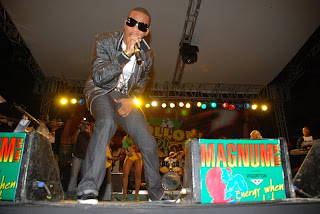 Patrons at Magnum Follow DI Arrow were treated to numerous stellar performances from the likes of Macka Diamond, who graced the stage clutching a fresh bottle of Magnum Tonic Wine, Assassin, Lady Saw, Wayne Marshall and Mega Banton to name a few. There were several highlights on the show, these included the amazing Magnum girls who at one point corralled Professor Nuts during one of his more notable performances. 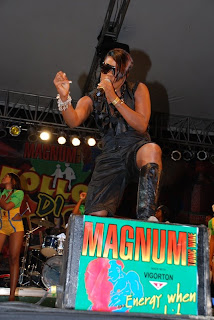 There were also commendable appearances from ‘The Man From Mars‘ Tony Matterhorn, Little Hero, Bugle & Serani and Elephant man who climbed atop both speakers on the stage before commandeering and voluptuous young lady from the audience. Chuck Fender and Anthony B also showed why they continue to be staples on the dancehall scene with Chuck Fender dominating his set and Anthony B returning to the stage three times due to pleas of encore from the massive audience. Magnum Follow Di Arrow was a culmination of months of planning and rehearsals, all of which was organised by the promoter Dexton Ennis who had high praises for those who helped to make the event a success.

“We put in a lot of preparation into this event; from rehearsals to preparing of the venue. I would like to commend the artistes for what can be considered some of the best performances to ever grace the James Bond Beach stage,” Dexton Ennis Promoter, Magnum Follow Di Arrow observed, “The production was of a high quality and Magnum Tonic wine delivered by providing the energy and the motivation we needed to make Magnum follow Di Arrow St Mary’s premiere dancehall show.“

The conclusion of Magnum Follow Di Arrow 2008 was a pleasant surprise to many. Bounty Killa, the father of the Alliance came on stage at about 5 am belting out some of his huge hit tunes to the joy and pleasure of the audience. Bounty, in his militant best manifested the style and dexterity he is known for. It was in the middle of his set that the daddy called on the son and the Magnum fuelled crowd erupted with joy. Mavado was amazing and showed why he is now on top of the dancehall world, overpowering the venue with his recent hits from Deh Yah Pon the Gully Side to Life of a Gangsta on the Shootout Riddim.

It was at this point that Bounty Killa and Mavado surprised the massive audience by calling on the Don Gorgon who cruised onto the stage in his signature style this time sporting a large umbrella. Mavado and Ninja man then went on to satisfy the crown with a friendly tune for tune segment with Bounty Killa interjecting periodically. The three dancehall kingpins on the stage at the same time was a surprise the crowd never expected and many patrons went home satisfied with the dancehall tet-a-tet.