The International Open Domino Inc. will host their 1st annual Open Code Tournament. The two-day tournament is scheduled to be held on April 19th-20th,from 10:00 AM to 10:00 PM at the Caribbean Performing Arts Center (CPAC) 1020 E 48th Street, Brooklyn NY 11203.

The Open Code Tournament is the first of its kind in the tri-state area. Participants are expected to hail from the Caribbean, Canada, England, Puerto Rico and The United States. The tournament is aimed at awareness of dominoes as an official sport with a new appreciation for its techniques and dynamics. Winners of the tournament will receive monetary incentives.

Dominoes are said to be a descendant of dice, and contain twenty-eight pieces (or “bones” a in their simplest form. The bones are marked in every combination of 0-6 dots, two per piece. More complex domino sets contain a larger number of pieces. 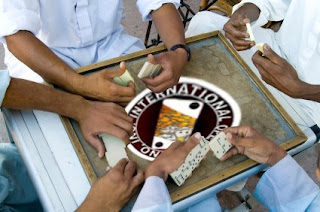 The game is said to have originated in China in the 12th century and made its way to Europe by the 18th century. Many Latin American countries consider dominoes as their national game. Through its evolution, the game now requires great skills and strategy. Players such as Jamaicans are known to play the sport for hours on end and have even placed monetary bets on the game.

Jeffrey Maragh, president of the International Open Domino Inc., hopes that Dominoes will become a national past time in the United States. Just like poker he is optimistic that the sport will be made into a profitable venture. Born in Kingston Jamaica, the savvy entrepreneur is an avid domino player. His love for the game stared at age twelve and continued when he migrated to the United States at age 21.

Jeffrey has participated in national and international tournaments, including the 2007 world championship in New York. In alliance with the Hispanic League, Mr. Maragh, Delroy Ximines and the rest of his team, intentions are to take the game to “the next level” with a stable position on sports channels such as ESPN on which the game’s tournaments have previously been featured.

The Press event to officially launch the Domino Tournament will be held at Negril Village Restaurant located at 70 West 3rd street in Manhattan on Wednesday March 19th at 7pm.