Wow, now cops in St Kitts’ satellite state can really clamp down on crime! That is, once the perp is on foot –

The Triathlon Federation and the Cycling Federation for St Kitts and Nevis recently handed over two Trek Bicycles to Permanent Secretary in the Premier?s Ministry Mr. Joseph Wiltshire. He accepted the bicycles on behalf of Premier of Nevis Hon. Joseph Parry for the Nevis Police Division. {Ed’s Note – Premier Parry was probably unable to HOOF it}

Mr. Gregg Phillip – a member of the organisation indicated that members of the joint Cycling and Triathlon Federation, was inspired to donate the bicycles to show the association’s love for Nevis.
The total cost for the two Trek Bicycles designed specifically for policing were in the amount of US $1200.00.

Mr. Wiltshire assured the President that the bicycles would help to improve the performance and duties of Police officers on Nevis and asked other stake holders to come on board to ensure that police officers were equipped with the tools necessary to make Nevis a safer destination for visitors and residents. 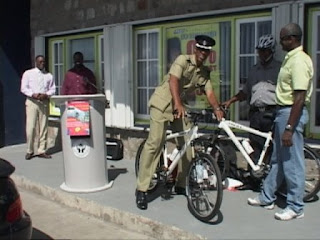 Superintendent Seabrookes, Head of the Nevis Division accepted the Trek Bicycles on behalf of the Nevis Royal St Christopher and Nevis Police Force.
He remarked the bicycles would strengthen the patrol fleet and expected results from their use since they could be maneuvered where other vehicles would not go, specifically the area of Charlestown. {Ed’s Note – This officer is one of the kindest ppl in the Universe, his Force gets a SINGLE laptop and he does not get on ungrateful; they get two push-bikes and he does not ask for any moto-scooters… What a guy, I’d’ve been fired every since!!}
The bicycles were donated ahead of the sixth annual Carino Nevis Health Spa Triathlon slated for March 16, 2008 to be held on Nevis. The Triathlon would be the biggest so far and is expected to significantly boost the Nevisian economy.
Participants for the Triathlon are expected from not only Nevis, but Japan, Holland, Spain and Mexico.