The sporting facilities being constructed by St Kitts’ Ministry of Sports around the main island will raise the chances of the twin-island federation being successful in the sports tourism sub-sector.

This is the firm belief of Donald Lockerbie, President of OLYMPVS INTERNATIONAL LLC – a worldwide sports facility and operations consulting firm, based in North Carolina (USA), Barbados and Switzerland.

Lockerbie, who served as Venue Development Director for the ICC Cricket World Cup 2007, is highly respected in international circles and is considered to be the pre-eminent planner of many of the United States? most acclaimed football and track and field facilities.

He became familiar with St. Kitts and Nevis during his CWC duties, as the refurbished Warner Park served as the venue for first round matches for four teams including world champions Australia as well South Africa. Mr. Lockerbie visited St. Kitts and Nevis last week and attended the opening of the 37th CARIFTA Games. 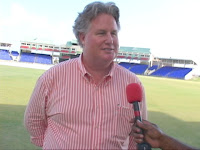 He told SKNIS that he was impressed with the Silver Jubilee Athletic Stadium. ?It is truly an excellent facility … and it will be wonderful for training purposes and hosting regional ? and major world wide competitions,? Lockerbie stated, adding that Mondo which installed the local track had also laid the tracks for the past five or six Olympic Games.

The stadium designer expressed that the twin-island Federation is uniquely positioned to raise its profile on the regional and international level. ?You have essentially here in St. Kitts, a sports campus of high level football, cricket and athletics. ? I don?t know of too many countries that have [these stadiums] of a [high] caliber within a mile or two of each other,? he noted. The visiting official stressed the continued marketing of these facilities to ensure ?the word gets out? as much as possible about the destination and its offerings.

The professionalism demonstrated by local officials in organizing and managing world class events as well as the renowned Kittitian and Nevisian hospitality were praised by Mr. Lockerbie, who noted that these are also key ingredients for success. He stated that these components were motivating factors for the Australian cricket team?s request to return to St. Kitts during their tour of the West Indies later this year. The West Indies Cricket Board has scheduled the fourth and fifth One Day International matches for Warner Park on July 4 and 6 respectively.

Mr. Lockerbie used the visit to St. Kitts to tour Warner Park and applauded the staff of the Ministry of Sports for the upkeep of the stadium. ?The facility people know what they are doing and there is a great pride here ? and that just makes me so excited to be back here,? he said. ?You don?t want to come back and see something that?s not as good as when you left it and right now it is in super shape.?

Mr. Lockerbie has been involved in the development of well over 400 sports facilities and sporting events throughout North America and around the world.