Female incontinence cases on Nevis receive expert attention – please do not take the piss out of this!

Florida based Urologist Dr. Brian Cohen conducted medical screenings at the Alexandra Hospital in Nevis just over the weekend for women with incontinence problems.

Dr. Cohen indicated he specialised in the area of female bladder issues in Miami, Florida and he became familiar with Nevis from a long time colleague, Dr. Thwaites who had professional and friendly ties to the people of Nevis.
He said Dr. Thwaites had done some prostate screening on Nevis in 2007 and he was committed to focus on women?s health for 2008. He said the request was made by Dr. Thwaites for him to travel to Nevis and conduct several hours of screening on women who were experiencing incontinence symptoms.
The Urologist spelled out the definition for incontinence in layman?s terms.
?If you have urine to come out without you wanting to, that?s incontinence and it depends on what brings on the incontinence. Women may have coughing or laughing or sneezing, or lifting something heavy that would causes them to leak urine. Other women say they have a very strong urge to go to the bathroom and sometimes unable to control,? the Urologist explained.
The doctor revealed that when he spoke with his patients at the clinic and they informed him that they have incontinence, his duty as an expert Urologist was to differentiate what kind of incontinence a patient had in order to assign the best treatment to them. He said the difference in the type of incontinence depended on the type of treatment.
He elaborated on two specific kinds of incontinence. They are – Stress Incontinence and Overactive Bladder Symptoms. He also gave an example of the latter. 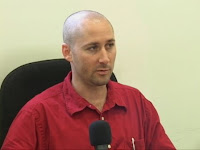 ?Women may tell me that they have to go to the bathroom very frequently, once an hour or once a half an hour and they have to wake up very frequently to go to the bathroom at night time to urinate, they have a very strong urge to go, sometimes they are unable to control the urge and the urge starts leaking out not wanting to,? he said.
Dr. Cohen revealed that medication helps with that type of incontinence. He also said that surgical treatments were dependent on whether women had Stress Incontinence. He described Stress Incontinence as weakness of urine when women coughed, laughed or lifted something heavy.
He disclosed that in the United States alone there were about 17 million women with Overactive Bladder symptoms. According to Dr. Cohen, the number for determining women with Stress Incontinence may probably not be quite as well characterised as that of women who experienced Overactive Bladder problems.
He assured the Department of Information that incontinence was not a problem like cancer that could cause a patient to die. Globally, women who experienced incontinence symptoms valued it as a quality of life issue. He said when he talked to his patients at the Clinic on Nevis, and those whom he spoke with for six years, they have consistently said that their quality of life was important to them and more importantly, he had the solutions for them to improve their quality of life.
Dr. Cohen gave an expert opinion as to why women were more susceptible to Stress Incontinence; ?As far as Stress Incontinence goes, the mechanisms and the anatomical differences between men and women were really one of the big factors into the fact that women have more Stress Incontinence than men do. The other one was women carry their children when they get pregnant and men don’t.?
He noted that was another huge factor that played into weakening the muscle, the ligaments and the structures of the pelvis that supported the bladder, which led to incontinence.
He also said that in the case of Overactive Bladder symptom, there remained the same number of women who have the condition of incontinence as there are men and it became more common as they aged.
Another medical condition he explained that he had experience dealing with was women who had Prolapsed problems. He said Prolapsed was a similar process that causes women to have incontinence. It affected the organs near the pelvis and would cause the muscles and the ligaments to become weak.

?The muscles in the pelvis and the ligaments in the pelvis and the bones in the pelvis were designed to hold the organs in place and when those muscles becomes weak and the supporting structure becomes weak, the organs would drop down and cause discomfort in the vagina which could be a very severe problem,? he said.
He said he had seen both cases of Prolapsed, Stress Incontinence and Overactive Bladder symptoms at the Clinic on Nevis.
Dr. Cohen conducted incontinence screenings on Nevis throughout the day. He promised to return to Nevis at an undisclosed date, to continue more screenings on women who may have missed the first session and were thoroughly pissed off.