‘EDUCATION IS NO JOKE’ SCHOOL TOUR CULMINATES ON A POSITIVE NOTE

The No Joke Entertainment and VP Records ‘Education Is No Joke‘ school tour has culminated on a good note. Members of the music fraternity came out during Black History Month to give their support to the tour finished last month. The tour gave the entertainers the opportunity to give back to their schools and featured artistes such as, Sean Paul, Busy Signal, Macka Diamond, D’Angel and Voice Mail. 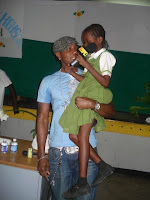 Daville visited his Alma-Mater, Norman Manley High School where received an overwhelming response from both the students and administration. Daville focused his visit on the importance of students respecting themselves alluding to a recent incident of a student from a corporate area school being involved in sexual acts on tape. Daville also looked at the issue of discipline in schools, encouraging the students to be disciplined not only in their school work but also in their daily lives.

During his visit, Daville gave out stationary to the most improved students and created a buzz by lifting up one of the smaller students while focusing his talk and student self esteem.

Assassin paid a surprise visit to Camperdown causing frenzy among the mostly female students at the school. Assassin was very eloquent in his talk and focused on the importance of education. 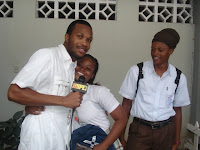 Assassin used himself as an example of an artiste who is very focused on his education and maintained that even dancehall artiste need to think about the future as they won’t be on top of the dancehall world forever. Assassin also presented prizes to the most improved students; one male and one female. He also commended the students in maintaining their schools high standards.

“I am overwhelmed by the response to the tour, we had the idea it would be successful but we did not know there would be such a great coming together of everyone involved to make it such a success,” commented Mario Lazarre CEO, No Joke Entertainment, “We are showing that it is not difficult to motivate students and that the work that is necessary can be done with the right planning and execution. The tour has also proven that the entertainers are an asset to the society and can make a very positive contribution to the nation.”

This tour has proven Jamaica’s entertainment industry can come together and have a positive impact on their young fans. 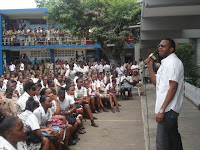 No Joke Entertainment is confident that their efforts won’t go unrewarded as they have made a positive impact on the students of the various schools they have visited throughout February ‘Education is No Joke‘ school tour will continue ext year and based on the response this year will be a further success.

“The tour has been a great success; VP Records is glad that we had the opportunity to be involved in such an effort,” Yolan Zanders Marketing Manager VP Records, Jamaica observed, “We know that next year will be even bigger and better and more artistes will be involved. We are also happy that we could have made such a positive impact on the young students in whose hands the future of the entertainment industry rests.”