The Earthrace team has announced they are moving the start of their round the world speed record attempt to 29th March. 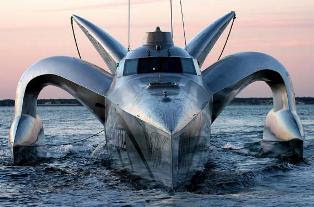 Earthrace is an incredible 78ft wave-piercing trimaran that runs exclusively on biodiesel. The not for profit project is run as a carbon neutral enterprise, making it one of the world?s most environmentally-friendly powerboats.

The crew aim to secure the world speed record, to create greater awareness of the use of biofuel from sustainable sources as part of the solution to counter damage to the environment through fossil fuels, and to promote the need for everyone to lead sustainable lives.

Skipper Pete Bethune explains, ?We?ve been alerted to the impact that La Nina might have on our round the world record attempt. Bob McDavitt, our MetService Weather Ambassador from New Zealand, has told us that we could risk affecting our progress through the Pacific Ocean if we continue with the original start date of the beginning of March. We also want to ensure that Earthrace is in her optimum state for speed and efficiency by carrying out extensive sea trials following the major refit that she has been undergoing in Spain.?

Pete adds, ?We are fully committed to beating the round the world speed record this time, and we do not intend to leave anything to chance. There have been five attempts, including our own first attempt last year, since the current record was set in 1998 and we will do everything we can to mark this tenth anniversary by beating it!?

A moderate to high LA NI?A pattern over the next few months is expected. This will make the trade winds much stronger, and the seas much higher than normal.

La Ni?a is the name given to the climate pattern caused by having cooler than normal seas along the equatorial Pacific Ocean. The subsequent changes to the atmosphere and ocean circulation are as varied and diverse as those of El Ni?o.

El Ni?o, caused by the arrival on shores of warmer than normal seas, was named after the nearest festival to when it normally occurs, El Ni?o de Navidad (the birth of the Christ child). It got a Spanish name because it was named by the Indians in Peru, who speak Spanish.

In the late 1980s, when there was a strong opposite cycle to El Ni?o, caused by cooler than normal seas, climatologists coined the term LA NI?A as it?s opposite.

Earthrace is run as a not-for-profit venture with a boat, ground and London HQ crew made up of international volunteers from New Zealand, the UK, Hungary, the US and Sweden.

The biofuel she is using has been donated by SGC Energia (Portugal). It is derived from waste cooking oil, as well as soya and canola oils from sustainable sources

Not only is Earthrace herself made from environmentally friendly components including hemp, but the project maintains a carbon neutral status through the purchase of carbon offsets and that income is used to fund a sustainable biofuel project in Egypt. The offsets account for any CO2 produced through transportation of the biofuel to the different fuel stops, the biofuel itself, and all travel undertaken by the ground crew

From the start in Sagunto, Spain (nr Valencia), the boat will cross the Pacific, Atlantic and Indian oceans and travel through the Panama and Suez Canals as it thunders around the planet?s circumference, attempting to break the official round-the-world speed record for a powerboat.

The current world record holder is British boat ?Cable and Wireless Adventurer? who took the record in a time of just under 75 days in 1998.