Antigua just had elections, Baldwin Spencer stayed in while the Birds regained a slight toehold in their Parliament, Antigua’s also the home for the latest adventure of Eric Jerome Dickey’s Gideon. Those of you expecting to find a modern day Afro-American Kama Sutra set in the tropics, as opposed to Tropic of Cancer, with a smattering of Spillane or Spenser (Remember the TV series with Robert Urich as the title character and his buddy Hawk?) – may be disappointed. Dying For Revenge is more deep-fried than hard-boiled, in the sense that this is more like Sin City straddled between Falmouth Harbour, downtown Georgia & Motor City with a dash of James Bond’s Femme of the Film.
As was covered in previous trailers on this News-Blog, Gideon is on the run – the preacher’s wife in Detroit believes dead men tell no tales… Now she used her husband’s death, which she paid for, to galvanise her own foray into politics – she wants no loose ends as she consolidates her reign.

Enter El Matador and his shop-addicted wife, who the author hints as being based on a UK director and his former spouse famed for being an unashamedly material girl. Matador earned his death-sobriquet for his preference to make a clean cut with his targets, literally!

His wife, when not bumping off contracts, is saving her sole at the Church of Blahniks and building a body count to earn a trip to shlep with the Sex & The City quartet.

They are hot on the trail of Gideon and he brings in a former partner to ride through the ghettoes of Georgia to the 365 beaches of Antigua in a mad race to see who’s left standing? This is no cakewalk, the “hero” gets shop-worn more than once and he still touts the advantages of BC Powder to counteract contusions.

All of this, plus an indirect appearance from Sir Allen Stanford, room in the plot left for a fourth installment and more… The book had a US release in November, while it didn’t reach the Caribbean until January.

The depictions of the Caribbean isle were vivid and even Barbados gets more than one mention, the tourism scene portrayed in the book is prevalent throughout the region. But those expecting lurid lovemaking passages will be left a little dry, those who wanted more of Gideon’s gritty side will be gorged to capacity. This mix of violence, fashion and travelogue will keep you moving if not in suspense since some of the elements can be telegraphed from afar – but in all, still entertaining if you happen to be in St John’s relaxing after voting over there. 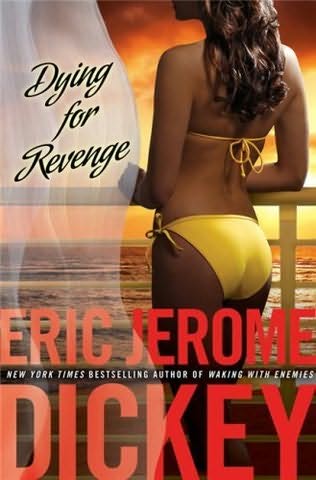 Let me continue by categorically stating before presenting evidence, I am not hoping to institute a lawsuit, nor am I seeking financial gain. In my view, RESPECT and HONESTY come above such material persiflage and, can – in the long run – serve better than cash.

Just the other day, Heat Magazine used one of my photos for their Graeme Hall release… With NO acknowledgment whatsoever! Rather than create a duel, I called top personnel and said if budget is a problem, that is NOT a problem with me – don’t use my name nor the title of this News-Blog, rather one could say;- “Courtesy http://bajanreporter.blogspot.com” as this would go further in promoting my site. There was rapid agreement and profuse apologies, no harm done and mutual service between entities remains cordial yet professional.

To simply behave as though nothing happened and not even a shout-out to Barbados at the least is rather reprehensible in my view. Let me expound further on this amazing journey…

Mr Dickey has an entrenched habit of leaving a blank cheque by way of thanks for whoever he did not mention in numerous of his tomes, nevertheless, at the same time there are those he singles out for not only appreciation but lists their website or blog – as he did in his motorcycle homage, Chasing Destiny. 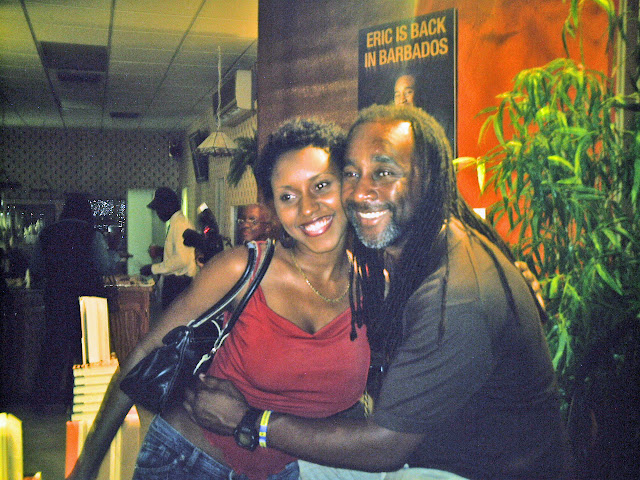 In the previous book to …Revenge, which was Pleasure, Mr Dickey’s protagonist is a ghost-writer. This is someone who may compile or gather notes and craft a novel or biography as material dictates.

In Drive Me Crazy, what initially appeared as two underlying characters (A writer called Freeman and his gal-pal Sade) were in fact the catalyst for ultra-protagonists Earl & Cynthia to earn money to pursue their own freedom – ironic since the tee-shirt worn by Sade was stating MANUMISSION.

The real secret was that Freeman was riding on Sade’s initial plots, themes and ideas and she was tired of the burden of carrying him.

So what does this have to do with …Revenge? A lot, for my view, but I want YOU to be the judge!

With all due respect, the ideas or concept of El Matador, his shop2drop spouse and Hawks – Gideon’s former co-assassin – are all at Mr Dickey’s door, if he did originate their personae. 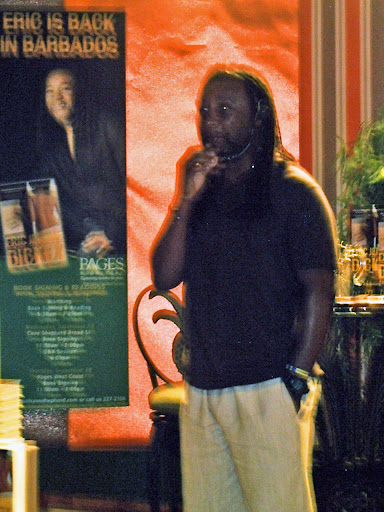 However, let’s start with a reminder of the basic concept;-

DYING FOR REVENGE marks the return of Gideon, a contract killer with a troubled past and an even more troubled present. Gideon vows to leave his life as a hit-man behind, but he soon finds out that he can never run too far from his past. When a job in Detroit goes wrong, Gideon should have killed the woman who hired him when he had the chance. Now a powerful politician threatened by Gideon’s knowledge of her secrets, and motivated by the desire to get her ultimate revenge, this woman will stop at nothing to have Gideon’s life.

The Lady from Detroit hires two hit-men to handle the job ? El Matador, a deadly killer who never misses a shot, and his sexy but ruthless wife, a shopaholic with a weakness for designer labels. But when Gideon proves himself an impossible target, the lady from Detroit sets her sights on those closest to him.

On the exotic island of Antigua, Gideon enlists the help of fellow assassin Hawks to square off against his deadliest adversaries yet. Amidst the palm trees and white sands, Gideon must outsmart and defeat his pursuers before it’s too late, and find a way out of this dangerous game of cat and mouse.

Now? We look at correspondence issued at various points BEFORE the book’s completion – please note I STILL have ALL relevant exchanges stored at their various points of origin, ready for display if I am contested… 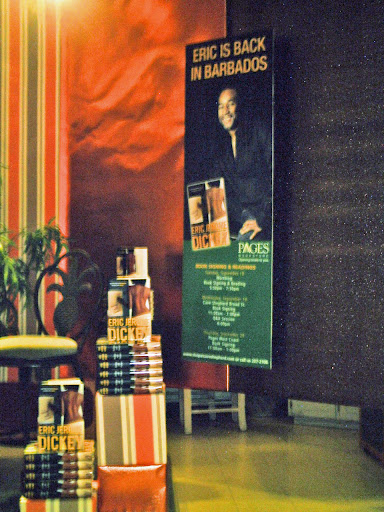 NB – I have edited only the actual e-mail address, since I respect one’s right to privacy; within reason….

HEY BRO! How is it going? In ATL now, trying to write. Looking at Gideon! What do you think needs to be in book with him? Just asking…trying to fig out the danger, this time no Lola and no Mrs. J, at least not planing to use them, but you never know. Oh, if you have links to Barbados papers, send them to *****. I’ve created a character for the book, but she’s in Antigua…maybe an islands thing for the next go. Have to keep Gid moving! So much was “resolved” that it’s will be interesting to see where i take this one!


me: or no cricket for Gid?
ejd: wait… there is some hint of it
but not a big thing
7:28 AM me: The last email I sent you had my snail mail address
7:29 AM ejd: book has ssome cool chase scnese, some nice fights, more violent, less sex
the real gideon
some sex, but i didnt want this one to get off center like wwe
me: LOL
I doubt folks mind
ejd: same level of sex in wwe, that level of violence in d4r
7:30 AM me: damn
you gonna scare the peeps
ejd: did like the movie rififi
that film has about 25 minutes of silence
me: Gott watch that one, sounds like Guy Ritchie
7:31 AM ejd: i had no dialogue, chase and fights, killing for at least 25 pages, not one word spoken
me: wow
ejd: its about to be remeade
remade
me: that is VERY unusual
ejd: what is
me: 25 minutes of silence
ejd: very
and it was BRILLIANT
me: and to replicate it in a novel
7:32 AM more skills
ejd: well mine is no dalogue
dialogue
7:34 AM me: I am looking at all my short stories after that class and see so much revision needed now, gotta make the time – I am off to get ready for work, ugh!
ejd: mostly in antigua, of course
too bad it wasn’t bdos!
me: Great
ejd: but i did the bdos twins last book
7:35 AM man the email confessions i am getting behind that book… good lord
me: Caribbean is still cool

As I stated from the beginning, I am not looking for money… Even if it was as basic as; “Ian in Barbados, thanks for letting me pick your brain,” plus my link? Then I’d’ve felt like a dog walking across a desert with a full bladder then finding an orchard. Instead, this is what really happened, nada-zip-zero! I am yet to hear from Mr Dickey since late last year, and his MySpace page has had no blog updates since Dec 12th. I leave it for YOU to assess – feel free to comment!