Ce’Cile will continue her slate of performances with her European tour which begins at the end of June. The tour will see Ce’Cile performing at several high profile reggae and dancehall events including: Reggae Summer Jam in Germany (July 4), Rototom Sunsplash in Udine, Italy (July 7) and Splash Festival in Leipzig Germany (July 12). Ce’Cile will make several other stops in Europe in an effort to promote the European release of her Bad Gyal album, including France, Belgium, Switzerland, Poland and Spain.

Ce’Cile has several ‘hot‘ tunes sizzling up the air waves with the pre-eminent one being Ride or die on the ‘Journey Riddim‘ self produced along with Della Danger and Jigsy King. The video for Ride or Die, directed by Dexter Pottinger, was shot in Jamaica last month and features cameos by Jamaican international actor Paul Campbell and will be released in April. Ce’Cile has also released Seven Days on a remake of the ‘Duck Riddim‘ produced by 12 Nine Records and Resolution produced by Scatta. The videos for both Resolution and Seven Days are to be shot in April.

This Summer, Ce’Cile boasts a double-release for her Bad Gyal album. 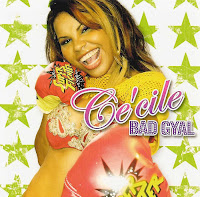 The U.S. release of the Bad Gyal album comes out of the continued alliance between the Danger Zone Music Group and SOBE Entertainment. The album features the remix of Waiting featuring Shaggy and Dancehall’s Side featuring Beenie Man, produced by Scott Storch.

“People will get to understand more about Ce’Cile and how I think from this album,” Ce’Cile, Recording Artiste told reporters, “I have been signed to SOBE Entertainment for a year and half and this alliance has proven fruitful. SOBE is an international company and along with Danger Zone, they have enabled me to do more stuff than I could have done by myself, the affiliation with Danger Zone brings so many possibilities.”

Ce’Cile has recently joined other Jamaican female artistes to form the charity: Sisters to Sisters which will hold a media-thon on April 13 in aid of the Bureau of Women’s Affairs Shelter for Battered Women and the Women’s Centre Foundation of Jamaica’s (WCFJ) programme for adolescent mothers.