Britney Spears Has Tattoo Removed – Due to appear on CBS sitcom

The ?Toxic? singer had a Hebrew tattoo on the back of her neck showing the three words ?mem,? ?hey? and ?shin?, 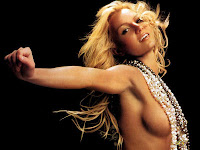 but when the 26-year-old popstar was spotted out shopping in Los Angeles earlier this week, the tattoo has mysteriously disappeared. It was clear Spears had the tattoo removed, sources imply she spent about $2,000 on laser removal.

The ex-tattoo was just one of a collection for Britney, which includes pink dice on her forearm, a fairy on the small of her back, a butterfly and vine chain on her right foot, a star on her hand and a pair of lips on her wrist, apparently read in Hebrew ‘The Power to Heal‘.

The removal is a strong sign that she is really trying to get her life back on track, after the last sad goings-on.

In fact, she’s already bagged herself a guest starring role on an episode of the US sitcom How I Met Your Mother. Apparently she’s been very professional on set and is starting to look a lot healthier – at last, a spot of good news for her fans.